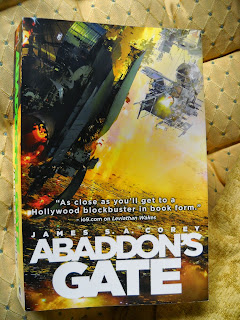 Abaddon's Gate, by tandem author James S. A. Corey, is the 3rd book in the Expanse series, and I am loving these.

For generations, the solar system -Mars, the Moon, the Asteroid Belt- was humanity's great frontier. Until now. The alien artifact working through its program under the clouds of Venus has appeared in Uranus's orbit, where it has built a massive gate that leads to a starless space beyond.

Jim Holden and the crew of the Rocinante are part of a vast flotilla of scientific and military ships going out to examine the artifact. But behind the scenes, a complex plot is unfolding, with the destruction of Holden at its core. As the emissaries of the human race try to decide whether the gate is an opportunity or a threat, the greatest danger is the one they brought with them.

A Methodist pastor figures prominently in the plot.

It was a lesson he'd never forgotten. That humans only have so much emotional energy. No matter how intense the situation, or how powerful the feelings, it was impossible to maintain the heightened emotional state forever. Eventually you'd just get tired and want it to end.

Anna knew quite a few members on the Latter-day Saints church. They agreed with the Methodists on a few minor things like not drinking alcohol, which gave them a sense of solidariy at inter-faith conventions. They disagreed on some important things, like the nature of God and His plan for the universe, which didn't seem to matter as much as Anna would have thought.

It had occurred to Anna then that there really wasn't any such thing as a "mixed"church group. No matter what they looked like, or what they chose to call Him, when a group of people called out to God together, they were one. Even if there was no God, or one God, or many gods, it didn't matter. Faith, hope, and love, Paul had written, but the greatest of these is love.

God might not care about financial standing, but He was the only one.

And I'm pleased at the optimism that assumes that in the far distant future at the edge of the known, there'll still be coffee:

I'm much less pleased that God is always without exception considered male.

this is an exciting, thrill-ride of a read that matches up nicely with previous two novels in the series and keeps you entertained until the very end. Most of all, Abaddon’s Gate’s winning point is that, in the end, it is about the human characters and their dilemmas that keep you reading.

Abaddon’s Gate delivers everything fans of the Expanse series have come to expect – exquisite action scenes, huge spaceships and distances, ambitious and intricate plotting, main characters with robust and hidden depths, and some fucking terrifying alien technologies. ... The Expanse series is one of the best things to happen to science fiction in the last five years,

io9 says, "Taken together, Leviathan Wakes, Caliban's War and Abaddon's Gate are an explosive, exciting adventure that blasts the hinges off the doors and keeps going." Publishers Weekly closes with this: "Politics, philosophical ideas, and humor mingle in a tale that will shock and surprise. New readers should start with book one; series fans will find this installment the best yet." The series has its own Wiki.

It adds something to the reading to know the religious meaning of the word Abaddon.
Posted by Divers and Sundry at 4:30 AM