Elvis and the Hotel Chisca 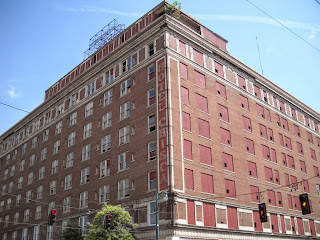 The Hotel Chisca doesn't look like much now, does it? All boarded up. There's a tree growing up there at the top. But back in the day, it was an elegant place!

Dewey Phillips broadcast his show from here. Sam Phillips (no relation) passed along a song Elvis had recorded, and Dewey Phillips played it. The teenagers swamped the station with phone calls asking that the song be played again. And again. It was played 17 times in a row! This is the song:


This was the first time Elvis was broadcast, and Rolling Stone is reported to consider this the first rock and roll song.

There's good news for the Chisca, and it sounds like renovation is in process, expected to be completed by the end of next year. They plan to turn it into apartments and have retail space on the ground floor.
Posted by Divers and Sundry at 4:30 AM