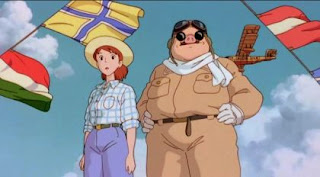 Porco Rosso is a 1992 Hayao Miyazaki animated film about a WWI fighter pilot who works after the war as a bounty hunter tracking down air pirates. He has been turned into a human-like pig, and the sub-plot includes material on when that happened and how it has affected his life.

I'm having trouble finding a trailer with English subtitles, but you can see one at this youtube link.

This film is one of The Younger Son's favorite Miyazaki movies, and it's delightful. Something for everyone: adventure, romance, comedy, tragedy, cute kid, air battles....

Moria closes with this: "...even when Hayao Miyazaki is making an overtly comic adventure film like this, he cannot help but reach for the breathtakingly epic transcendence that makes his films so exquisite." The New York Times has a positive review. Empire Online gives it 3 out of 5 stars and says it's not one of Miyazaki's best. Nihon Review concludes,


It’s a fun adventure peppered with simple drama that never takes itself too seriously, but it’s handled with uncommon care. It’s animation made with more than just ink, paper, and film. There’s magic, there’s love, and it creates a truly wonderful experience.

DVD Talk says it "isn't like other Miyazaki movies. It's fun and light, but not a kids' flick. It's exciting, but neither bloody nor vicious. It has a controversial ending and a true historical feel. In other words, it's about as far away from Spirited Away as you can get" and concludes by saying, "Funny, pleasant on the eyes, sweet in a way different from any other Ghibli film, Porco Rosso is a celebration of Miyazaki's greatest loves, and can be appreciated mostly by adults, but has nothing objectionable for children." Rotten Tomatoes has a critics score of 94%.

The picture at the top of the post is from Wikipedia.
Posted by Divers and Sundry at 7:30 AM