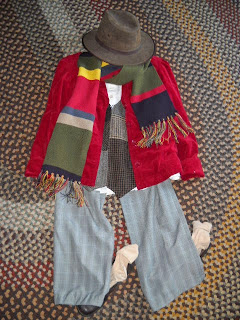 The Daughter, The Younger Son and I were quite excited about the theater showing of the new Doctor Who episode premier. We love Capaldi for the role, and -even though we don't get a TV channel that airs the series- we faithfully follow the news online and buy the DVDs as soon as they're released. I've been a fan since back in the day when the series aired on PBS. We wanted to be a part of this.

It was assumed we would go dressed appropriately for the experience. The Daughter and I each dressed as The Doctor we consider our own, and The Son went as Captain Jack. My garb was accumulated from several Goodwill store trips around town, except for the scarf (purchased from the Doctor Who rack at the local Spin Street) and the hat (Stein Mart). I feel like I hit the jackpot with this combination. I love the jacket.

This is the Fourth Doctor look I was trying to imitate: 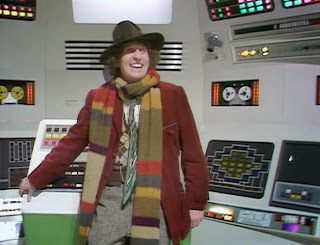 The look I achieved is at the top of the post. Not bad, right?

The Daughter wore this dress from Hot Topic with red high-top Converse shoes to be the Tenth Doctor: 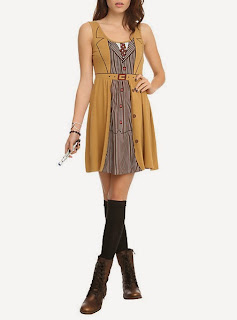 and combined it with the fez. Yes, the fez, which her Doctor does put on in one of his scenes. In fact, there's a fez connection to several of the Doctors.

The Younger Son found the perfect thrift store coat, changed the buttons from navy to gold and added some stripes to the shoulders and was transformed into Captain Jack Harkness. He went with the vest instead of suspenders.

We all had such great fun. There were other people who also came in themed attire: a couple of people dressed as the TARDIS, there were a few Tenth Doctors. The only drawback was the distance. We drove to Little Rock, Arkansas, for the show, which was our closest option. Why, oh why, didn't they offer this in Memphis?