Sometimes Forever Is Too Long

... like when you go to a nice little restaurant named Petra Cafe, and they give you your drink in a styrofoam cup. That cup will be around as long or longer than the ancient city of Petra has been. Sheesh. 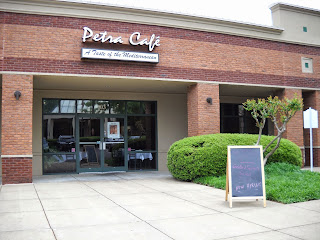 Petra Cafe is one of 4 cute little restaurants by that name, and this one in the Sanderlin Center is the closest one to us. The Daughter and I met The Husband there for lunch one day early in the summer. The styrofoam cups hit me hard for some reason, so I won't demean T Tuesday by mentioning the drinks. The Husband had the Pisa Paninni, and The Daughter and I each had the Turkey Pita: 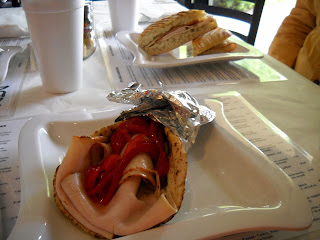 The food was wonderful! I thought the red peppers were perfect! The waitress was welcoming and charming. You can see the lunch menu here. Our total was over $35. I've already decided what I want when we go back, but I may bring my own glass. (Not really, but I do hate styrofoam cups.)

Go Memphis has a positive review. Yelp gives it 5 out of 5 stars.

For dessert The Daughter and I headed back to Casablanca Cafe. We've eaten there before, but this time we specifically planned on having their Turkish Coffee and dessert. I had the baklava, and The Daughter had the chocolate mousse: 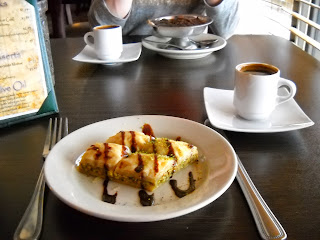 The desserts were both very tasty. I didn't much care for the coffee. It had flavoring of some sort, but we couldn't tell what. sweetening, of course, but something else, too. This Wikipedia article says cardamom or pistachio grains are sometimes used. Maybe that was it. It was interesting, and I'm glad I tried it, but I won't get that again.

T Tuesdays are a friendly gathering of women who drink (and most often craft) hosted at Bleubeard and Elizabeth's place. Feel free to join in. They make everybody feel welcome over there.