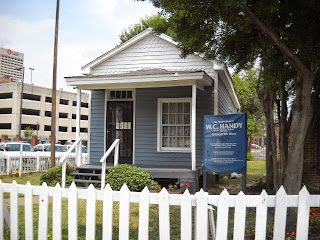 The Daughter and I hadn't even realized this was downtown, but once we knew where it was we knew we had to go.

This is the house W. C. Handy, Father of the Blues, lived in when he was in Memphis from 1909 to 1917. The house was moved to this Beale Street location in the 1980s to restore and preserve it. The tour was a delight, led by an enthusiastic young man willing to share his extensive knowledge of Handy's story with us. The museum had period furniture in the front room. In the back room there were many photos of Handy and his family, and framed sheet music and newspaper articles. Fascinating insight into the local life of a legend.

Handy's song The Memphis Blues was written in 1909 on the upper floor of the Solvent Savings Bank building just north of the home's current location on Beale Street: 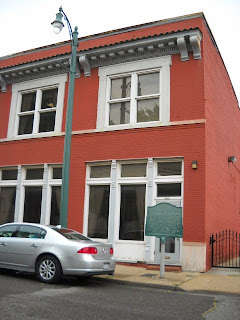 Here's a recording of that song:

There are more photos here at Historic-Memphis.com, and more information about his life at Biography.com.

Memphis has a rich music heritage, and I'm always excited to explore more of it.
Posted by Divers and Sundry at 4:30 AM