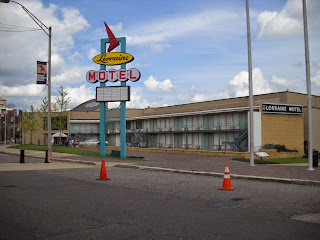 The Daughter and I had never been to The National Civil Rights Museum, even though I grew up in Memphis and was downtown when Martin Luther King, Jr. was assassinated. For me it always seemed a hard thing -to tour the site where it happened. They've recently done a major renovation and added new exhibits, and it seemed like maybe it was time to explore the place.

Coming up towards the front of the museum: 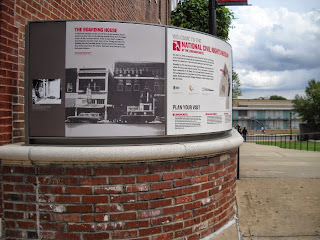 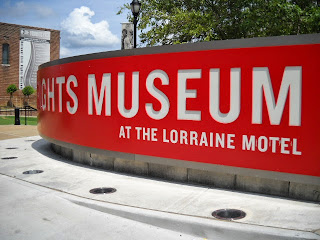 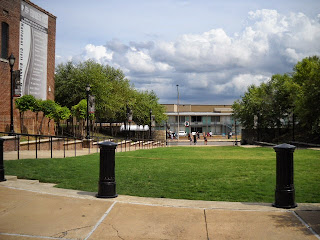 There are stations with audio and video in front of the motel in the area where the swimming pool used to be. As you enter the motel the history begins with displays about Africans brought to North, Central and South America as slaves. Then there's an overview film.

The exhibits which cover the history of post-Civil War re-construction and Jim Crow laws in the South are detailed. They include full-sized statues, a bus like the one Rosa Parks refused to move to the back of (and which you can sit in), a lunch counter like the ones where the sit-ins took place, a re-creation of the cell in Birmingham where MLK served time and wrote the famous letter, photographs of children killed in bombings of churches.... There's really too much there to name. Suitable audio interpretation, actual historical recordings, and re-enactments accompany most exhibits. They permit non-flash photography, but my camera sometimes doesn't listen to me when I turn off the flash so I didn't risk it.

The museum continues through history until you reach the garbage strike which brought King to Memphis. You can view the room he stayed in and the room across the hall where others with him stayed. You can see outside to the balcony where he fell.

The tour is a powerful one.

Across the street is the Legacy Museum: 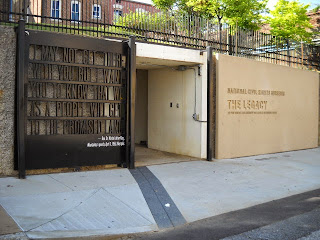 and that's the place the assassin shot from. You can see a re-creation of the room the killer rented there and the bathroom window he shot from. That's the creepiest part of the whole experience.

Here's an MSNBC report of the re-opening:

Here's a History.com report on the origin and preservation of the motel and the beginnings of the museum that has images and video of some of the exhibits, including King's room and the view from the shooter's window:

This museum is well worth the trip. We spent 2 1/2 hours and could easily spend that much time again. It's a powerful and inspirational experience.

Across the street is an ongoing 26+ years protest: 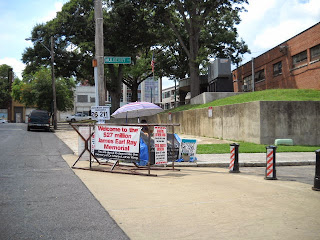 She claims the museum glorifies King's killer and that the money should go to more directly help the poor. The money, of course, is not available for other purposes, having been donated and set aside specifically for this historical/interpretative/educational site. Ms. Jacqueline Smith did not live in the motel when MLK stayed there, moving there in the early 1970s, but she was the last resident of the motel and was evicted so the museum could be opened. She has strong convictions and is willing to share them with visitors.
Posted by Divers and Sundry at 4:30 AM