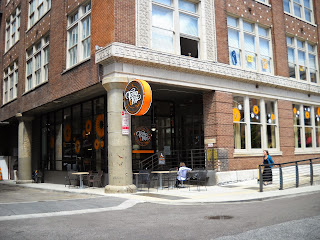 I had been to Tamp & Tap before (I had their espresso that time), but The Daughter had never been. Earlier this summer we went so she could see what it was like. We got pour over coffee, and The Daughter got raspberry biscotti: 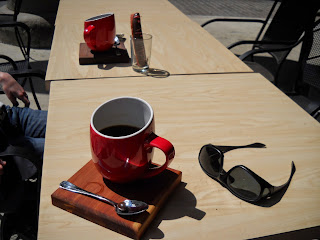 We like their cups. This was the first time I've had pour over coffee out anywhere, and I must say it was as good as I had hoped. I'm seeing it on more menus lately, so I guess it's the new "thing". I'm on board with it! We sat on their patio people-watching. There was a woman parked around the corner unloading her car. We thought she might be moving into Van Vleet Flats. I think it would be great fun to live downtown. I'm not sure where the closest decent-sized grocery store would be, but that's the only drawback I can see to living downtown.

Please join the Tea Tuesday gathering hosted by Bleubeard and Elizabeth, where's there's talk of tisanes among a variety of other topics..