Quietly in Their Sleep 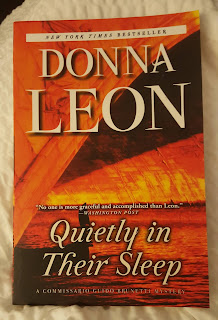 Quietly in their Sleep is the 6th novel in the Commissario Guido Brunetti mystery/detective series by Donna Leon. This is a long-running series, and I'm working my way through them as I find or are gifted them. The book order doesn't seem to matter with these. I've enjoyed them all and look forward to more. This one takes place in the early spring.


In the sixth novel featuring Donna Leon's ever-charming and sympathetic protagonist, Commissario Guido Brunetti comes to the aid of a young nun, a nurse who has five patients unexpectedly die and decides to leave her convent. In the course of his inquiries, Brunetti encounters an unusual cast of characters but discovers nothing that seems criminal. Is the nun simply creating a justification for abandoning her vocation? Or has she stumbled onto something very real and very sinister -something that places her own life in imminent danger? A beautiful, suspense-filled novel, Quietly in Their Sleep is Donna Leon at the top of her form.