The Knowers is a science fiction short story by Helen Philips. You can read it online here. It begins,


There are those who wish to know, and there are those who don’t wish to know. At first Tem made fun of me in that condescending way of his (a flick of my nipple, a grape tossed at my nose) when I claimed to be among the former; when he realized I meant it, he grew anxious, and when he realized I really did mean it, his anxiety morphed into terror.

“Why?” he demanded tearfully in the middle of the night. “Why why why?”

I couldn’t answer. I had no answer.

“This isn’t only about you, you know,” he scolded. “It affects me too. Hell, maybe it affects me more than it affects you. I don’t want to sit around for a bunch of decades awaiting the worst day of my life.”

Touched, I reached out to squeeze his hand in the dark. Grudgingly, he squeezed back. I would have preferred to be like Tem, of course I would have! If only I could have known it was possible to know and still have been fine with ignorance. But now that the technology had been mastered, the knowledge was available to every citizen for a nominal fee.

Tem stood in the doorway as I buttoned the blue wool coat he’d given me for, I think, our four-year anniversary a couple years back.

“I don’t want to know where you’re going,” he said. He glared.

To honor T Stands for Tuesday I'm offering this quote from the story and a public domain illustration: 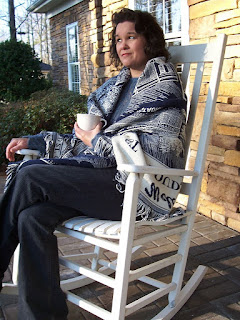 We sat drinking coffee in rocking chairs on the front porch of a bed-and-breakfast on a hill in the chill of early spring. Tem was generous to me; it was his least favorite day of the year, but he managed to pretend; we’d stroll. We’d eat ice cream. The silly little band-aids.

My life would seem normal — bland, really — to an outside observer, but I tell you that for me it has been rich, layered and rich.