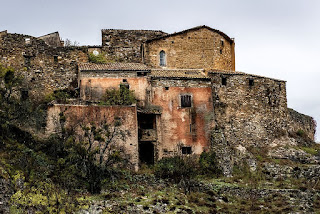 The Great Breteche is an 1831 short story by Honoré de Balzac. It is the story behind the abandonment of a manor house. You can read it online here. It begins,


“Ah! madame,” replied the doctor, “I have some appalling stories in my collection. But each one has its proper hour in a conversation—you know the pretty jest recorded by Chamfort, and said to the Duc de Fronsac: ‘Between your sally and the present moment lie ten bottles of champagne.’”

“But it is two in the morning, and the story of Rosina has prepared us,” said the mistress of the house.

“Tell us, Monsieur Bianchon!” was the cry on every side.

“At about a hundred paces from Vendôme, on the banks of the Loir,” said he, “stands an old brown house, crowned with very high roofs, and so completely isolated that there is nothing near it, not even a fetid tannery or a squalid tavern, such as are commonly seen outside small towns. In front of this house is a garden down to the river, where the box shrubs, formerly clipped close to edge the walks, now straggle at their own will. A few willows, rooted in the stream, have grown up quickly like an enclosing fence, and half hide the house. The wild plants we call weeds have clothed the bank with their beautiful luxuriance. The fruit-trees, neglected for these ten years past, no longer bear a crop, and their suckers have formed a thicket. The espaliers are like a copse. The paths, once graveled, are overgrown with purslane; but, to be accurate there is no trace of a path.

“Looking down from the hilltop, to which cling the ruins of the old castle of the Dukes of Vendôme, the only spot whence the eye can see into this enclosure, we think that at a time, difficult now to determine, this spot of earth must have been the joy of some country gentleman devoted to roses and tulips, in a word, to horticulture, but above all a lover of choice fruit. An arbor is visible, or rather the wreck of an arbor, and under it a table still stands not entirely destroyed by time. At the aspect of this garden that is no more, the negative joys of the peaceful life of the provinces may be divined as we divine the history of a worthy tradesman when we read the epitaph on his tomb. To complete the mournful and tender impressions which seize the soul, on one of the walls there is a sundial graced with this homely Christian motto, ‘Ultimam cogita.’

“The roof of this house is dreadfully dilapidated; the outside shutters are always closed; the balconies are hung with swallows’ nests; the doors are for ever shut. Straggling grasses have outlined the flagstones of the steps with green; the ironwork is rusty. Moon and sun, winter, summer, and snow have eaten into the wood, warped the boards, peeled off the paint. The dreary silence is broken only by birds and cats, polecats, rats, and mice, free to scamper round, and fight, and eat each other. An invisible hand has written over it all: ‘Mystery.’

“If, prompted by curiosity, you go to look at this house from the street, you will see a large gate, with a round-arched top; the children have made many holes in it. I learned later that this door had been blocked for ten years. Through these irregular breaches you will see that the side towards the courtyard is in perfect harmony with the side towards the garden. The same ruin prevails. Tufts of weeds outline the paving-stones; the walls are scored by enormous cracks, and the blackened coping is laced with a thousand festoons of pellitory. The stone steps are disjointed; the bell-cord is rotten; the gutter-spouts broken. What fire from heaven could have fallen there? By what decree has salt been sown on this dwelling? Has God been mocked here? Or was France betrayed? These are the questions we ask ourselves. Reptiles crawl over it, but give no reply. This empty and deserted house is a vast enigma of which the answer is known to none.