When It Changed is a 1972 award-winning science fiction short story by Joanna Russ. You can read it online here. It begins,


Katy drives like a maniac; we must have been doing over 120 kilometers per hour on those turns. She’s good, though, extremely good, and I’ve seen her take the whole car apart and put it together again in a day. My birthplace on Whileaway was largely given to farm machinery and I refuse to wrestle with a five-gear shift at unholy speeds, not having been brought up to it, but even on those turns in the middle of the night, on a country road as bad as only our district can make them, Katy’s driving didn’t scare me. The funny thing about my wife, though: she will not handle guns. She has even gone hiking in the forests above the forty-eighth parallel without firearms, for days at a time. And that does scare me.

Katy and I have three children between us, one of hers and two of mine. Yuriko, myeldest, was asleep in the back seat, dreaming twelve-year-old dreams of love and war: running away to sea, hunting in the North, dreams of strangely beautiful people in strangely beautiful places, all the wonderful guff you think up when you’re turning twelve and the glands start going. Some day soon, like all of them, she will disappear for weeks on end to come back grimy and proud, having knifed her first cougar or shot her first bear, dragging some abominably dangerous dead beastie behind her, which I will never forgive for what it might have done to my daughter. Yuriko says Katy’s driving puts her to sleep.

For someone who has fought three duels, I am afraid of far, far too much. I’m getting old. I told this to my wife.

“You’re thirty-four,” she said. Laconic to the point of silence, that one. She flipped the lights on, on the dash—three kilometers to go and the road getting worse all the time. Far out in the country. Electric-green trees rushed into our headlights and around the car. I reached down next to me where we bolt the carrier panel to the door and eased my rifle into my lap. Yuriko stirred in the back. My height but Katy’s eyes, Katy’s face. The car engine is so quiet, Katy says, that you can hear breathing in the back seat. Yuki had been alone in the car when the message came, enthusiastically decoding her dot-dashes (silly to mount a wide frequency transceiver near an I. C. engine, but most of Whileaway is on steam). She had thrown herself out of the car, my gangly and gaudy offspring, shouting at the top of her lungs, so of course she had had to come along. We’ve been intellectually prepared for this ever since the Colony was founded, ever since it was abandoned, but this is different. This is awful.


Join me as I visit the T Stands for Tuesday bloggers and have a cup of coffee: 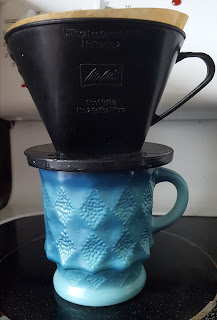 and enjoy the First Robin of Spring: 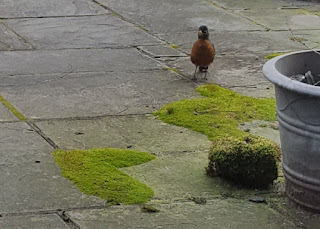 Of course robins are year 'round birds here, but we still set up a cry of "First Robin of Spring" every time we see one on a pretty day. It's a family tradition that predates me.
Posted by Divers and Sundry at 4:00 AM