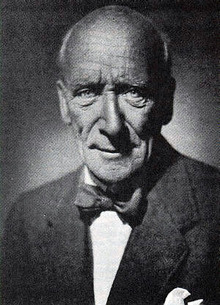 The Woman's Ghost Story is a 1907 ghost story, by Algernon Blackwood (pictured above). You can read it online here. It begins,


"Yes," she said, from her seat in the dark corner, "I'll tell you an experience if you care to listen. And, what's more, I'll tell it briefly, without trimmings -I mean without unessentials. That's a thing story-tellers never do, you know," she laughed. "They drag in all the unessentials and leave their listeners to disentangle; but I'll give you just the essentials, and you can make of it what you please. But on one condition: that at the end you ask no questions, because I can't explain it and have no wish to."

We agreed. We were all serious. After listening to a dozen prolix stories from people who merely wished to "talk" but had nothing to tell, we wanted "essentials."

"In those days," she began, feeling from the quality of our silence that we were with her, "in those days I was interested in psychic things, and had arranged to sit up alone in a haunted house in the middle of London. It was a cheap and dingy lodging-house in a mean street, unfurnished. I had already made a preliminary examination in daylight that afternoon, and the keys from the caretaker, who lived next door, were in my pocket. The story was a good one—satisfied me, at any rate, that it was worth investigating; and I won't weary you with details as to the woman's murder and all the tiresome elaboration as to why the place was alive. Enough that it was.

"I was a good deal bored, therefore, to see a man, whom I took to be the talkative old caretaker, waiting for me on the steps when I went in at 11 p.m., for I had sufficiently explained that I wished to be there alone for the night. [Pg 109]

"'I wished to show you the room,' he mumbled, and of course I couldn't exactly refuse, having tipped him for the temporary loan of a chair and table.

"We went in, he shuffling after me through the unlighted hall up to the first floor where the murder had taken place, and I prepared myself to hear his inevitable account before turning him out with the half-crown his persistence had earned. After lighting the gas I sat down in the arm-chair he had provided—a faded, brown plush arm-chair—and turned for the first time to face him and get through with the performance as quickly as possible. And it was in that instant I got my first shock. The man was not the caretaker. It was not the old fool, Carey, I had interviewed earlier in the day and made my plans with. My heart gave a horrid jump.

"'Now who are you, pray?' I said. 'You're not Carey, the man I arranged with this afternoon. Who are you?'

"I felt uncomfortable, as you may imagine. I was a 'psychical researcher,' and a young woman of new tendencies, and proud of my liberty, but I did not care to find myself in an empty house with a stranger. Something of my confidence left me. Confidence with women, you know, is all humbug after a certain point. Or perhaps you don't know, for most of you are men. But anyhow my pluck ebbed in a quick rush, and I felt afraid.

"'Who are you?' I repeated quickly and nervously. The fellow was well dressed, youngish and good-looking, but with a face of great sadness. I myself was barely thirty. I am giving you essentials, or I would not mention it. Out of quite ordinary things comes this story. I think that's why it has value.

You can have it read to you below: