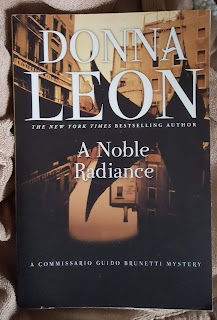 A Noble Radiance is the 7th book in the Donna Leon Commissario Guido Brunetti mystery series. It takes place in the early Spring.


In a small village at the foot of the Italian Dolomites, not far from Venice, the gardens of a deserted farmhouse have lain untouched for decades. But the new owner, eager for renovations to begin, is summoned to the house when his workmen disturb a macabre grave. Nearby, a valuable signet ring is found, reigniting an infamous cold case of kidnapping and diappearance involving one of Venice's oldest, most aristocratic families. The victim's cousin, next in line to inherit the family business and fortune, is the logical suspect, but Brunetti senses something more insidious at play. Only Commissario Guido Brunetti can unravel the clues and find his way into the heart of patrician Venice and that of a family grieving for their lost son.