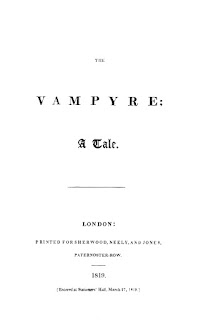 The Vampyre is an 1816 horror story by John William Polidori. It's considered the first modern vampire story and the first to romanticize the vampire. The recent angst-ridden sparkly vampires pale in comparison. You can read it online here. It begins,


It happened that in the midst of the dissipations attendant upon a London winter, there appeared at the various parties of the leaders of the ton a nobleman, more remarkable for his singularities, than his rank. He gazed upon the mirth around him, as if he could not participate therein. Apparently, the light laughter of the fair only attracted his attention, that he might by a look quell it, and throw fear into those breasts where thoughtlessness reigned. Those who felt this sensation of awe, could not explain whence it arose: some attributed it to the dead grey eye, which, fixing upon the object’s face, did not seem to penetrate, and at one glance to pierce through to the inward workings of the heart; but fell upon the cheek with a leaden ray that weighed upon the skin it could not pass. His peculiarities caused him to be invited to every house; all wished to see him, and those who had been accustomed to violent excitement, and now felt the weight of ennui, were pleased at having something in their presence capable of engaging their attention. In spite of the deadly hue of his face, which never gained a warmer tint, either from the blush of modesty, or from the strong emotion of passion, though its form and outline were beautiful, many of the female hunters after notoriety attempted to win his attentions, and gain, at least, some marks of what they might term affection: Lady Mercer, who had been the mockery of every monster shewn in drawing-rooms since her marriage, threw herself in his way, and did all but put on the dress of a mountebank, to attract his notice:— though in vain:— when she stood before him, though his eyes were apparently fixed upon her’s, still it seemed as if they were unperceived; — even her unappalled impudence was baffled, and she left, the field. But though the common adultress could not influence even the guidance of his eyes, it was not that the female sex was indifferent to him: yet such was the apparent caution with which he spoke to the virtuous wife and innocent daughter, that few knew he ever addressed himself to females. He had, however, the reputation of a winning tongue; and whether it was that it even overcame the dread of his singular character, or that they were moved by his apparent hatred of vice, he was as often among those females who form the boast of their sex from their domestic virtues, as among those who sully it by their vices.

About the same time, there came to London a young gentleman of the name of Aubrey:

You can listen to it read to you here: