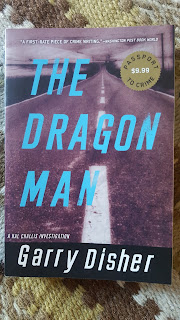 The Dragon Man by Garry Disher is an award-winning book, the first novel in the Australian series featuring Detective Inspector Hal Challis. I picked it up on a whim. I am not sure I've read any novels that take place in Australia, but I find this fascinating. The characters have interesting lives, and I appreciate how well fleshed out their private lives are while still maintaining the focus on the crime-based plot. I'll pick up the rest of this series along the way. This book takes place during the Christmas holiday season.


MEET HAL CHALLIS, DETECTIVE FOR THE MORNINGTON
PENINSULA POLICE FORCE IN SOUTHEAST AUSTRALIA, IN THE
FIRST INVESTIGATION IN THIS PRIZE-WINNING CRIME SERIES

A serial killer is on the loose in a small coastal town near Melbourne, Australia. Detective Inspector Hal Challis and his team must apprehend him before he strikes again. But first, Challis has to contend with the editor of a local newspaper who undermines his investigation at every turn, and with his wife, who attempts to resurrect their marriage through long-distance phone calls from a sanitarium, where she has been committed for the past eight years for attempted murder -his.

Reviewing the Evidence says it "completely engages the reader". Kirkus Reviews closes a positive review by saying, "This series debut from the prolific Disher (The Sunken Road, 1996, etc.) doesn’t read like one, thanks to fully formed characters and wall-to-wall mysteries. The offbeat setting’s a bonus for US readers." Publishers Weekly calls it "an intelligent, atmospheric police procedural".