Death of an Englishman 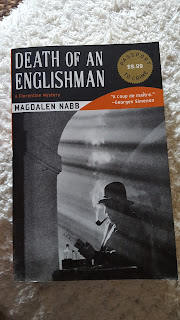 Death of an Englishmen is a 1981 mystery, the debut novel and first in a series by Magdalen Nabb. I enjoyed this, finding an interesting look at the characters of police officers and citizens and expats in Florence. The dialogue was great at illustrating the people. I'll definitely look for more of these.


Marshal Salvatore Guarnaccia of the Florentine Carabinieri wants to go south for Christmas to spend the holiday with his family in Sicily, but a retired Englishman living in Florence has been murdered. Who has shot Mr. Langley-Smythe in the back? The marshal must discover the identity of the criminal and the motive for the crime before he can take the train home for the holidays.


Dotty old dear, they'd have said -and don't tell me you wouldn't have said the same, you needn't blush, I've seen you giving my shoes funny looks but when you get to my age it's either be comfortable and keep going or be dignified and sit in a chair all day and I know which suits me.

So many people lived on a knife edge, just managing to keep going,, just managing to "keep straight," but if anything went wrong, a missed train, a week without wages, for them it was a tragedy because they had no resources except their families who were as poor as themselves.


there are genial glimpses of English expatriate life in Florence here (a dotty vicar, a pathetic library); the Italian/British interplay -especially the chumship between the two younger cops- is quietly witty; and the non-tourist side of the city is nicely captured, from Christmas-tree sellers to come-as-you-are restaurants.