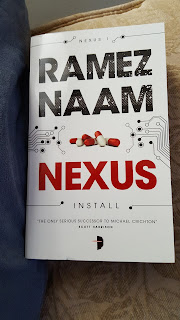 Nexus is the first book in a trilogy by Ramez Naam. I found this an interesting read with relevance to current issues. It's maybe a bit too deliberately relevant to suit me, and I probably won't read the sequels.

When a young scientist is caught improving Nexus, he's thrust was over his head into a world of danger and international espionage, for there is far more at stake than anyone realizes.


It had been the most painful, most confusing, most troubling six months of his life. But it had opened his eyes. And eyes, once opened, seldom closed again.

"Communism, capitalism, all the same. The powerful want resources. Water. Natural gas. Uranium. The powerful see them, reach out their hand and scoop them up, and who cares who they crush in the process, eh? Dictatorships and democracies, all alike. Your precious democracy doesn't care about us, does it? All men are created equal, eh? We all have inalienable rights. Unless we live so very far away, perhaps? You Americans defeated your British king because he was a dictator. We are the same. We will defeat our dictator, even if you oppose us."

We're all born dying, someone had said. What matters is only how we spend the instant we're given.

*******
The Guardian says, "Ramez does a brilliant job of examining the ramifications of upgrading humankind and combines in‑depth philosophising –occasionally resorting to clunky info-dumps– with effective action sequences in a mind‑expanding cyber-thriller." Wired praises it, calling it "a bleeding edge technical thriller that is full of surprises."

io9 says, "overall it's a fast, fun read which is both emotionally engaging and thought-provoking. You'll be mulling over the implications of Nexus — the book and the drug — long after you put the book down." Strange Horizons says it's "a modern-day Edisonade" and calls it frustrating.
Posted by Divers and Sundry at 4:00 AM