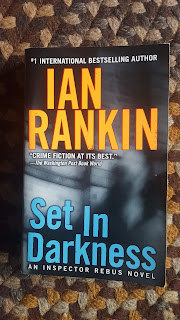 Set in Darkness (2000) by Ian Rankin is the 11th of the Inspector Rebus novels. I like the main character and the series as a whole, and I'm reading these as I find them. This book takes place during December.

A man dead for twenty years is found behind a wall in the renovated Parliament Building of newly independent Scotland. A tramp jumps off of a bridge and leaves behind a suitcase full of cash. And Roddy Grieve, a political candidate and the favorite son of a famous family, is killed...

Two of Detective Inspector John Rebus's team are assigned to the old case. His protege Siobhan Clarke takes on the homeless man puzze. Roddy's high-profile murder should be his. But higher-ups hand it to a young bootlicker, creating a bitter Rebus, a loose cannon, and a cop mad enough to go one step too far...

From an illicit affair with a suspect to a battle with the bottle, Rebus is seen wrestling with his dark side. But when he links Roddy's murder with a killer he knows all too well, he has to face his own demons -if it's not too late. For when passion, power, and money are at stake, even the best policeman can die...

Publishers Weekly says, "Topical Scottish nationalism and the new Parliament, along with Rankin's consistently fascinating view of Edinburgh's seedy side, give the novel interest beyond its plot. And the plot is worthy of the series". Kirkus Reviews concludes, "Rankin, who won a Gold Dagger for Black and Blue (1997), adds another bracing Scotch sour to his fine Rebus series, concentrating this time on mordant family relationships, professional infighting, and the near-lethal mistakes of a good man." The Guardian has a plot summary.

I've read the following books in this series: