The Year of the Runaways 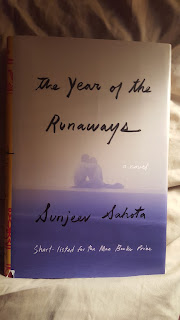 The Year of the Runaways is a novel by Sunjeev Sahota. You can read an excerpt here. I didn't much care for this. The book jacket copy wants me to be impressed with and surprised by the female character, but I was not. I didn't actually find any of it "surprising". There were so many named characters, the point of view changed too much for my taste, and then when it was done I was glad to be done with it. I was never tempted to quit reading, but I can't say I enjoyed the experience. The reviews I saw were universally positive, though, so what do I know....

From one of Granta's Best of Young British Novelists and Man Booker Prize nominee Sanjeev Sahota -a sweeping,
urgent contemporary epic, set against a vast geographical and historical canvas, astonishing for its richness and texture and scope, and for the utter immersiveness of its reading experience.

Three young men, and one unforgettable woman, come together in a journey from India to England, where they hope to begin something new -to support their families; to build their futures; to show their worth; to escape the past. They have almost no idea what awaits them.

In a dilapidated shared house in Sheffield, Tarlochan, a former rickshaw driver, will say nothing about his life in Bihar. Avtar and Randeep are middle-class boys whose families are slowly sinking into financial ruin, bound together by Avtar's secret. Randeep, in turn, has a visa wife across town, whose cupboards are full of her husband's clothes in case the immigration agents surprise her with a visit.

She is Narinder, and her story is the most surprising of them all.

The Year of the Runaways unfolds over the course of one shattering year in which the destinies of these four characters become irreversibly entwined, a year in which they are forced to rely on one another in ways they never could have foreseen, and in which their hopes of breaking free of the past are decimated by the punishing realities of immigrant life.

A novel of extraordinary ambition and authority, about what it means and what it costs to make a new life -about the capaciousness of the human spirit, and the resurrection of tenderness and humanity in the face of unspeakable suffering.

The New York Times calls it "deeply affecting". The NPR reviewer opens by saying, "Sunjeev Sahota has written what I suspect will be finest novel of the year." The Guardian calls it "a brilliant and beautiful novel" and says, "Sunjeev Sahota’s second novel makes a nonsense of common assumptions about what it means to write a political novel." The Telegraph says, "The main characters are superbly well drawn."

The Washington Post calls it "essentially “The Grapes of Wrath” for the 21st century" and says,

By following a handful of young men, Sahota has captured the plight of millions of desperate people struggling to find work, to eke out some semblance of a decent life in a world increasingly closed-fisted and mean. If you’re willing to have your vague impressions of the dispossessed brought into scarifying focus, read this novel.

The Times of India concludes, "as a depiction of the stark realities that unlucky, unqualified immigrants face, it is unlikely to be bettered." The Atlantic says, "Only portraits like Sahota’s can describe the experience of being a migrant." Kirkus Reviews has a positive review.

I read this as part of my book challenge this year. It is on the NPR list of Best Books of 2016.
Posted by Divers and Sundry at 4:00 AM