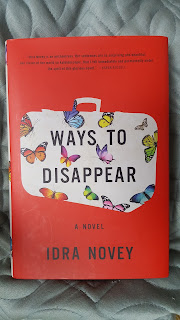 Ways to Disappear is a novel by Idra Novey. A poet and translator, this is Novey's only novel. Well, so far. Surely there'll be more. I'm keeping this one, certain I'll re-read it at some point.


Deep in gambling debt, the celebrated Brazilian novelist Beatriz Yagoda is last seen in Copacabana, holding a suitcase and a cigar and climbing into an almond tree. She abruptly vanishes, seemingly without a trace.

In snowy Pittsburgh, her devoted American translator, Emma, hears the news and, against all common sense, flies immediately to Brazil. There, in the sticky, sugary heat of Rio de Janeiro, Emma and the author's children conspire to solve the mystery of Yagoda's curious disappearance and stanch the demands of the colorful characters left in her wake, including a rapacious loan shark with a zeal for severing body parts and the washed-up editor who launched Yagoda's career years earlier.

Idra Novey's exhilarating debut is a madcap blend of mystery, romance, noir, and humor that flirts with the absurd while remaining deeply rooted in the devious heearts of its characters.

The New York Times has a positive review and says,


Novey has wholly eluded the hazards of writing about writers. Instead, this lush and tightly woven novel manages to be a meditation on all forms of translation while still charging forward with the momentum of a bullet

.
SF Gate calls it "a novel whose powers of enchantment rival those of its fictional author". The New Yorker says, "Novey’s fleet and vivid novel examines the nature of personal agency in life and in fiction, challenging the notion that we “honor what we recall by accepting that we cannot change it.”" Poets & Writers has a 5 minute audio of the author reading an excerpt.

NPR concludes a positive review with this:


Ways to Disappear is concerned not just with truth and the risks of its misplacement and misinterpretation, but with the importance of close reading. It's a delightful, inventive paean to writing that generates "real emotion" and "genuine unease." At one point Beatriz's publisher likens literature to steaks on a grill, testing both "for density" as well as "for something tender in the middle yet still heavy enough to blacken the air." This book is seared to perfection, medium rare.

Kirkus Reviews calls it "Delightful and original." Publishers Weekly says it's a "briskly paced first novel" and calls it "a clever literary mystery and a playful portrait of the artist as a young translator."

I read this book as part of my book challenge for this year. It is on NPR's list of best books of 2016.
Posted by Divers and Sundry at 4:00 AM