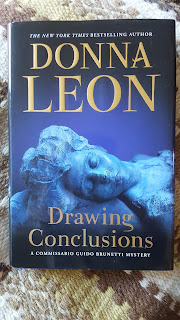 Drawing Conclusions by Donna Leon is #20 in the Commissario Guido Brunetti detective mystery series. I like these. I enjoy the descriptions of the Venice setting, I like the characters, I appreciate the plots and how they're developed.... I'm not reading these in publication order but just as I come across them.

This book takes place in the Autumn.

Nearly twenty years ago, when a conductor was poisoned and the Questura sent a man to investigate, readers first met the Ventian Commissario Guido Brunetti. Since Death at La Fenice, Donna Leon and her shrewd, sophisticated, and compassionate investigator have been delighting readers around the world. For her millions of fans, Leon's novels have opened a window into the private Venice of her citizens, a world of incomparable beauty, high culture, family intimacy, and delicious food. But, unknown to the crowds of toursts who flock to Serenissima each year, it is also beset by shocking crime, intractable social and environmental problems, and far-reaching, insidious corruption.

In Drawing Conclusions, the twentieth novel in the celebrated series, Commissario Guido Brunetti is called away from dinner late one night to investigate the death of a widow in her modest apartment. Though there are some signs of a struggle, the medical examiner rules that she died of a heart attack. It seems there is nothing for Brunetti to investigate, no crime to solve. But he can't shake the feeling that something or someone may have triggered the heart attack, that perhaps she was threatened. Conversations with the woman's veterinarian son, her younger upstairs neighbor, and the tight-lipped nun in charge of the old-age home where she volunteered do little to satify Brunetti's nagging curiosity.
With the help of Inspctor Vianello and the ever-resourceful Signorina Elettra, perhaps Brunetti can get to the truth -and find some measure of justice.

Insightful, emotionally powerful, and a superb addition to this cherished series, Drawing Conclusions reaffirms Donna Leon's status as one of the masters of literary crime fiction.

Kirkus Reviews concludes with this: "As languid in its movement as a gondola ride. Yet none of Brunetti’s earlier cases (About Face, 2009, etc.) is as remorselessly clear in connecting the delicately comic anti-authoritarian gestures Brunetti winks at to the miasma of corruption that hangs over his beloved Venice." Publishers Weekly closes a positive review by saying, "Compassionate yet incorruptible, Brunetti knows that true justice doesn't always end in an arrest or a trial."

Italian-Mysteries.com has a positive review which says, "Like the best of her beloved novels, Drawing Conclusions is insightful and emotionally powerful, and it reaffirms her status as one of the masters of literary crime fiction." Eurocrime says, "The twentieth novel in the acclaimed series about Venice policeman Commissario Brunetti is enjoyable whether or not you have read any of the previous volumes."

This is part of my book challenge to read a certain number from my To-Be-Read shelf.

I've also read these from this series: