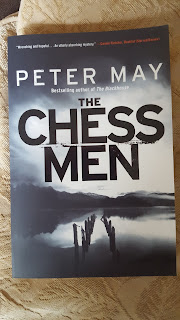 The Chessmen by Peter May is the third book in the Lewis Trilogy, a popular and well-received series which takes place on the Isle of Lewis off the coast of northern Scotland. I'm sorry to finish these but am looking forward to checking out this author's other work.

Now permanently resettled on the island of his birth in the Outer Hebrides, ex-Detective Inspector Fin Macleod has been employed by a local landowner to oversee security on a sizeable estate. His security detail at the Red River Estate brings Fin into contact with elusive local poacher and former school friend Whistler Macaskill.

As Fin pursues Whistler across the moors, they are forced into temporary shelter by a massive storm. When they emerge the next morning,
they are greeted by the aftermath of a freak natural phenomena -a "bog burst"- that has drained an entire loch of its water, revealing a mud-encased light aircraft in its wake. Struggling through the muck, Fin and Whistler are appalled by what they find inside: the body of their friend and former bandmate Roddy Mackenzie, whose single-prop plane disappeared in the area more than seventeen years earlier -just as Roddy was becoming an international rock star. Worse, the condition of the skeletal remains makes it clear Roddy was murdered rather than killed in the crash.

As he closes in on the truth behind the death of Roddy Mcknzie, Fin is confronted by the ghosts of his youth -and by the painful and unexpected ways in which the events of the past have warped the contours of the present.

Eurocrime calls it "an atmospheric novel" and "a good, solid mystery novel" and says, "The main strength of the novel is the wonderful depiction of the island, and the love which the men (mainly) have for it." The Independent says, "The Chessmen offers an almost visceral experience: we, too, are walking these windy cliffs and peat bogs".

Kirkus Reviews concludes, "The mystery—really, the mysteries—are untidy, but the atmosphere is altogether magical." Publishers Weekly has a review, saying it works fine as a stand-alone but is disappointing after the first two in the trilogy.