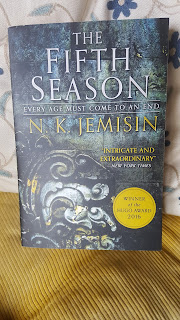 The Fifth Season by N. K. Jemisin is the first book in the Broken Earth trilogy. I picked it up because it won the Hugo Award for Best Novel in 2016. It deserved it. This book is good reading -an interesting and unusual setting with interesting and unusual characters. This is the point where I wish I wrote actual reviews instead of just noting a bit about what I've read. I can't praise it highly enough, but I'll be quoting reviewers who'll do a good job of explaining the attractions this book has to offer.


THIS IS THE WAY THE WORLD
ENDS FOR THE LAST TIME.
IT STARTS WITH THE GREAT RED RIFT
across the heart of the world's sole continent,
spewing ash that blots out the sun.
IT STARTS WITH DEATH,
with a murdered son and a missing daughter.
IT STARTS WITH BETRAYAL
and long-dormant wounds rising up to fester.
This is the Stillness, a land familiar with catastrophe,
where the power of the earth is wielded as a weapon.
And where there is no mercy.
The New York Times concludes a positive review with this:


“The Fifth Season” invites us to imagine a dismantling of the earth in both the literal and the metaphorical sense, and suggests the possibility of a richer and more fundamental escape. The end of the world becomes a triumph when the world is monstrous, even if what lies beyond is difficult to conceive for those who are trapped inside it.


Jemisin (The Shadowed Sun, 2012, etc.) is utterly unflinching; she tackles racial and social politics which have obvious echoes in our own world while chronicling the painfully intimate struggle between the desire to survive at all costs and the need to maintain one’s personal integrity. Beneath the story’s fantastic trappings are incredibly real people who undergo intense, sadly believable pain. With every new work, Jemisin’s ability to build worlds and break hearts only grows.

Publishers Review says, "Readers hungry for the next installment will also find ample satisfaction in rereading this one." Eyrie says, "It's gritty, textured, emotional, and furious, and very much worth reading." New York Journal of Books says, "The book starts with a devastatingly personal murder and ends with a world-changing request, and everything in between is fascinating, unexpected, and impressively well-rendered. It's also a stunningly diverse book."