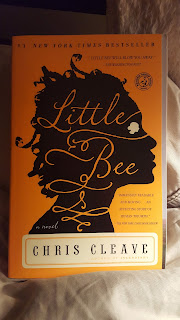 Little Bee is a 2008 novel by Chris Cleave. Wikipedia says,


The Other Hand, also known as Little Bee, is a 2008 novel by British author Chris Cleave. It is a dual narrative story about a Nigerian asylum-seeker and a British magazine editor, who meet during the oil conflict in the Niger Delta, and are re-united in England several years later. Cleave, inspired as a university student by his temporary employment in an asylum detention centre, wrote the book in an attempt to humanise the plight of asylum-seekers in Britain. The novel examines the treatment of refugees by the asylum system, as well as issues of British colonialism, globalization, political violence and personal accountability.


This is the story of two women. Their lives collide one fateful day, and one of them has to make a terrible choice, the kind of choice we hope you never have to face. Two years later, they meet again -the story starts there...

I liked the book, the way it was written, how the characters were revealed... I wasn't blown away by "the magic" of the book (the back of the book says, "The magic is in how the story unfolds"), but I think sometimes the copy on the cover is over-sell.

There's an interesting reflection on tea in this book, and I offer it for the T Stands for Tuesday blogger gathering, a weekly event hosted by Bleubeard and Elizabeth where all willing to share a beverage are warmly welcomed:


I do not have to describe for you the tea that Sarah made for me when she came down into the living room of her house that morning.
We never tasted tea in my village, even though they grew it in the east of my country, where the land rises up into the clouds and the trees grow long soft beards of moss from the wet air. There in the east, the plantations stretch up the green hillsides and vanish into the mist.
The tea they grow, that vanishes too. I think all of it is exported. Myself I never tasted tea until I was exported with it. The boat I traveled in to your country, it was loaded with tea. It was piled up in the cargo hold in thick brown paper sacks. I dug into the sacks to hide.
After two days I was too weak to hide anymore, so I came up out of the hold. The captain of the ship, he locked me in a cabin. He said it would not be safe to put me with the crew. So for three weeks and five thousand miles I looked at the ocean through a small round window of glass and I read a book that the captain gave me. The book was called Great Expectations and it was about a boy called Pip but I do not know how it ended because the boat arrived in the UK and the captain handed me over to the immigration authorities.

Three weeks and five thousand miles on a tea ship -maybe if you scratched me you would still find that my skin smells of it. When they put me in the immigration detention center, they gave me a brown blanket and a white plastic cup of tea. And when I tasted it, all I wanted to do was to get back into the boat and go home again, to my country. Tea is the taste of my land; it is bitter and warm, strong, and sharp with memory.
It tastes of longing. It tastes of the distance between where you are and where you come from. Also it vanishes -the taste of it vanishes from your tongue while your lips are still hot from the cup. It disappears, like plantations stretching up into the mist. I have heard that your country drinks more tea than any other. How sad that must make you -like children who long for absent mothers. I am sorry.


While the pretext of “Little Bee” initially seems contrived — two strangers, a British woman and a Nigerian girl, meet on a lonely African beach and become inextricably bound through the horror imprinted on their encounter — its impact is hardly shallow. Rather than focusing on postcolonial guilt or African angst, Cleave uses his emotionally charged narrative to challenge his readers’ conceptions of civility, of ethical choice.


Part-thriller, part-multicultural Aga saga, the book enmeshes its characters in the issues of immigration, globalisation, political violence and personal accountability. Lists of themes are often review-speak for "worthy but dull", but not in this case. Cleave immerses the reader in the worlds of his characters with an unshakable confidence that we will find them as gripping and vital as he does. Mostly, that confidence is justified.

The Washington Post says, "Despite the cutesy title (the book was more sensibly published in Britain as "The Other Hand") and the coy book-flap description ("It is a truly special story and we don't want to spoil it"), "Little Bee" will blow you away" and closes with this: ""Little Bee" is the best kind of political novel: You're almost entirely unaware of its politics because the book doesn't deal in abstractions but in human beings."

I read this as part of my Book Challenge this year. It's been on my to-be-read shelf for years.