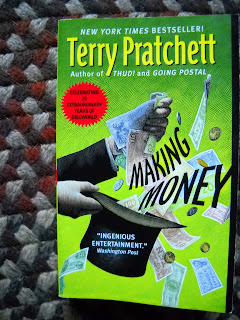 Making Money by Terry Pratchett is a 2007 Discworld novel, 36th in the series and 2nd of the books featuring Moist von Lipwig. I've loved every book in this series that I've read so far. They are laugh-out-loud funny. Death, who is one of my favorite characters, makes an early appearance. These books don't have to be read in order, and I'm reading them as I come across them on bookstore shelves. This one won the Locus Award for Best Fantasy Novel.

Amazingly, former arch-swindler-turned-Postmaster General Moist von Lipwig has somehow managed to get the woefully inefficient Ankh-Morpork Post Office running like... well, not like a government office at all. Now the supreme despot Lord Vetinari is asking Moist if he'd like to make some real money. Vetinari wants Moist to resuscitate the venerable Royal Mint —so that perhaps it will no longer cost considerably more than a penny to make a penny.

Moist doesn't want the job. However, a request from Ankh-Morpork's current ruling tyrant isn't a "request" per se, more like a "once-in-a-lifetime-offer-you-can-certainly-refuse-if-you-feel-you've-lived-quite-long-enough." So Moist will just have to learn to deal with elderly Royal Bank chairman Topsy (née Turvy) Lavish and her two loaded crossbows, a face-lapping Mint manager, and a chief clerk who's probably a vampire. But he'll soon be making lethal enemies as well as money, especially if he can't figure out where all the gold has gone.

There are times when "it does not get any better than this" does not spring to mind.


To a man traveling on his wits, a newspaper was a useful treasure. Stuck down your shirt, it kept the wind off your chest. You could use it to light fires. For the fastidious, it saved a daily resort to dockweed, burdock, or other broadleaved plants. And, as a last resort, you could read it.

The Guardian says, "even though Making Money is the 36th Discworld novel, Pratchett isn't resting on his laurels". SFReviews.net closes with this: "With ol' Terry maintaining this level of consistency and inspiration over so many books and so many years, I'll bet my bottom dollar he'll keep showing us the money for another thirty titles, and beyond." Fantasy Book Review says, "Making Money is definitely a Pratchett book you have to have on your shelf." The Independent gives it a positive review, as does BoingBoing.net.

I've read the following books from the series: