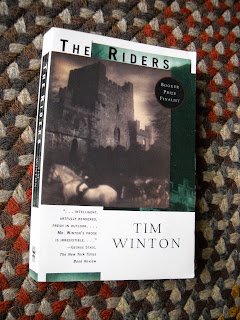 The Riders is a 1994 novel by Tim Winton. This was a can't-put-it-down book for me. It has such a desperate feel to it, and I just had to keep moving through this story. Now that I'm done, I look back over the experience and liken it to being swept out to sea on a ship with a blind captain. I kept saying, "No, don't do that, do this instead," and, "Just call the authorities for help." But, no, nobody ever listens to me. Honestly, I can't imagine anybody in real life actually behaving the way Scully does in this book.

Fred Scully eagerly waits in an Irish airport for the arrival of his wife and seven-year-old daughter. He envisions a new life ahead of them, a fresh start in an old farmhouse that he's been renovating during the weeks they have spent apart. But something goes catastrophically wrong. His daughter emerges inexplicably alone through the airplane terminal's glass doors, and Scully's life goes down in flames.

Thus begins The Riders, a dark and powerful journey into the obsessive psyche of a man in search of a woman vanished. It is a tale of the ghosts that plague relationships; of revelation sought in places and people; and of redemption found in the deyermined will to carry on. Epic in its sweep yet gripping in its details, The Riders is storytelling at its most haunting.

There's things that have no finish, Scully, no endin to speak of. There's no justice to it, but that's the God's truth. The only end some things have is the end you give em.

Kirkus Reviews concludes, "Emotions, character, and intellect so perfectly calibrated that a modest story of love betrayed becomes, in Winton's hands, a minor masterpiece." Publishers Weekly says, "His terse, lyrical descriptions, the throbbing energy of his prose, can illuminate a scene like a lightning bolt, cut like a knife or wring the heart."
Posted by Divers and Sundry at 4:00 AM