The entire plot of this movie revolves around a woman who loses her small independent family business because a big chain moves in. 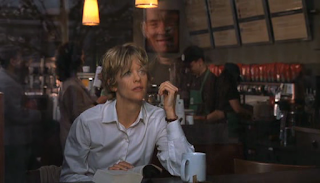 So tell me why she gets her coffee from Starbucks? Are there no independent locally-owned coffee shops she could give her business to? Starbucks? Really?


You've Got Mail is a sweet 1998 romantic comedy starring Tom Hanks and Meg Ryan. I'm not a big fan of romantic comedies, but I like this one. Except every time I think of the woman saddened by the loss of her business while she's drinking Starbucks coffee, my brain breaks just a bit more.

The New York Times has a positive review. Entertainment Weekly gives it a B and calls it a "valentine to modern love in New York". CNN says,


This crisp romantic comedy hits all the right keys. And it lovingly portrays Manhattan's Upper West side to perfection, and made me very homesick for my old neighborhood. Actually the West Side is almost a character in this film in the same way that Woody Allen uses his beloved city in most of his films.

Time Out calls it "manipulative". Empire Online gives it 3 out of 5 stars and concludes, "Hanks and Ryan are masters at making this kind of slight rom- com work, but even they run out of steam before the end." Rolling Stone gives it a place on its "most egregious product placement" list and names it one of the 10 best romantic comedies.

DVD Talk says, "Ultimately the film is an enjoyably lighthearted romantic comedy. I wouldn't call this the best example of the genre, but it's right up there and totally worth checking out." Roger Ebert opens with this: "The appeal of "You've Got Mail" is as old as love and as new as the Web. It stars Tom Hanks and Meg Ryan as immensely lovable people whose purpose it is to display their lovability for two hours, while we desperately yearn for them to solve their problems". Rotten Tomatoes has a critics score of 69%.

Please link your drink-related thoughts over at the link party at Bleubeard and Elizabeth's blog for T(ea) Tuesday.
Posted by Divers and Sundry at 4:00 AM