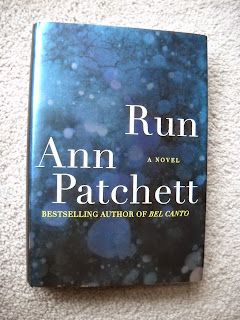 Run is a 2007 novel by Ann Patchett. I loved Bel Canto, and now I pick up her novels when I come across them. State of Wonder is on my tbr shelf.

I found the plot annoying in its unlikelihood. I don't require realism in fiction, but the plot in this one seemed all but impossible. Every time I saw a new revelation, I saw it as taking me further away from any possible realistic future for these characters. In the end, I didn't believe any of them.

Since their mother's death, Tip and Teddy Doyle have been raised by their loving, possessive, and ambitious father. As the former mayor of Boston, Bernard Doyle wants to see his sons in politics, a dream the boys have never shared. But when an argument in a blinding New England snowstorm inadvertently causes an accident that involves a stranger and her child, all Bernard Doyle cares about is his ability to keep his children —all his children— safe.

Set over a period of twenty-four hours, Run takes us from the Museum of Comparative Zoology at Harvard to a home for retired Catholic priests in downtown Boston. It shows us how worlds of privilege and poverty can coexist only blocks apart from each other, and how family can include people you've never even met. As in her bestselling novel Bel Canto, Ann Patchett illustrates the humanity that connects disparate lives, weaving several stories into one surprising and endlessly moving narrative. Suspenseful and stunningly executed, Run is ultimately a novel about secrets, duty, responsibility, and the lengths we will go to protect our children.


The New Yorker describes it as a "stylized fable of families, of parenting and vocations and race" and says, "...perhaps Ann Patchett in her own niceness gives us the world as it should be, rather than as the dirty, abrasive place it is. As realism, her novel is pale; but as a metaphoric representation of growth it transcends its sentimentality." NPR compares in unfavorably to her earlier work, saying, "Run isn't exactly a stumble, but Patchett's fifth novel hasn't provoked quite the same level of breathless critical or popular adoration." The Guardian praises the writing and says, "This is above all a book about good people who try to do their best by each other. Patchett's great strength is to accomplish this without sentiment or stupidity."

January Magazine says, "It is testimony to her talent that Patchett can take what often feels like an unwieldy or unworkable plot and render it seamless" and, "If Run is not one of Patchett’s best works, it must be said she is following a tough act -- herself. Though the book lacks the depth and detail of Magician or Bel Canto, it has all the smooth sentences and singing narrative skill that made Patchett’s earlier works so enjoyable." Kirkus Reviews concludes, "Compelling story but thematically heavy-handed."
Posted by Divers and Sundry at 4:00 AM