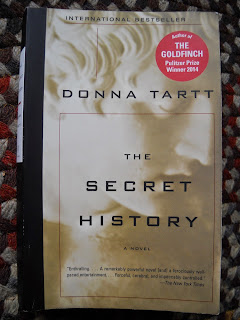 The Secret History is the 1992 first novel by Donna Tartt, who went on to win the Pulitzer Prize.


Under the influence of their charismatic classics professor, a group of clever eccentric misfits at an elite New England college discover a way of thinking and living that is a world away from the humdrum existence of their contemporaries. But when they go beyond the boundaries of normal morality they slip gradually from obsession to corruption and betrayal, and at last -inexorably- into evil.

It begins with this:


The snow in the mountains was melting and Bunny had been dead for several weeks before we came to understand the gravity of our situation. He'd been dead for ten days before they found him, you know. It was one of the biggest manhunts in Vermont history – state troopers, the FBI, even an army helicopter; the college closed, the dye factory in Hampden shut down, people coming from New Hampshire, upstate New York, as far away as Boston.

It is difficult to believe that Henry's modest plan could have worked so well despite these unforeseen events. We hadn't intended to hide the body where it couldn't be found. In fact, we hadn't hidden it at all but had simply left it where it fell in hopes that some luckless passer-by would stumble over it before anyone even noticed he was missing. This was a tale that told itself simply and well: the loose rocks, the body at the bottom of the ravine with a clean break in the neck, and the muddy skidmarks of dug-in heels pointing the way down; a hiking accident, no more, no less, and it might have been left at that, at quiet tears and a small funeral, had it not been for the snow that fell that night; it covered him without a trace, and ten days later, when the thaw finally came, the state troopers and the FBI and the searchers from the town all saw that they had been walking back and forth over his body until the snow above it was packed down like ice.

___
It is difficult to believe that such an uproar took place over an act for which I was partially responsible, even more difficult to believe I could have walked through it – the cameras, the uniforms, the black crowds sprinkled over Mount Cataract like ants in a sugar bowl – without incurring a blink of suspicion. But walking through it all was one thing; walking away, unfortunately, has proved to be quite another, and though once I thought I had left that ravine forever on an April afternoon long ago, now I am not so sure.

This books gets positive reviews from people who know what they are talking about. I like the book for the most part. The plot is intriguing, and all the characters are equally unlikeable but interesting. The writing drives me nuts for two main reasons:


1) There seem to be more commas and semicolons and dashes in this book than I'm used to noticing, and I'd rather not find myself being conscious of the punctuation while I'm reading. This is fairly representative:


I met her my first year of college, and was initially attracted to her because she seemed an intelligent, brooding malcontent like myself; but after about a month, during which time she'd firmly glued herself to me, I began to realize, with some little horror, that she was nothing more than a lowbrow, pop-psychology version of Sylvia Plath. It lasted forever, like some weepy and endless made-for-tv movie -all the clinging, all the complaints, all the parking-lot confessions of "inadequacy" and "poor self-image," all those banal sorrows. She was one of the main reasons I was in such an agony to leave home; she was also one of the reasons I was so wary of the bright, apparently innocuous flock of new girls I had met my first weeks of school.

2) There are also more similes than I really like to see. My experience with Clive Cussler's Sahara overdosed me on the simile, and I now notice them when they show up too often. Here are a few from The Secret History:

"...like some gabby old codger who would sit next to you on a bus and try to show you bits of paper he kept folded in his wallet" (p. 42)

I just don't like noticing these things, but when there's so much of it....

It took a lot of effort to force myself past my pet peeves, but I'm glad I did, As I started the book I couldn't imagine how the book could take up so many pages, but it never felt padded or labored. I'm glad I was able to make myself focus so that I could finish it, but I won't read it again. I guess I'm conflicted about this book. I would hesitate to buy anything else by her.


It's funny, but thinking back on it now, I realize that this particular point in time, as I stood there blinking in the deserted hall, was the one point at which I might have chosen to do something very different from what I actually did. But of course I didn't see this crucial moment then for what it was; I suppose we never do.


Any action, in the fullness of time, sinks to nothingness.

The Guardian lists 10 reasons to love it. Publishers Weekly praises it but adds, "the plot's many inconsistencies, the self-indulgent, high-flown references to classic literature and the reliance on melodrama make one wish this had been a tauter, more focused novel." This Independent reviewer says, "it was everything that I had hoped." Another reviewer from The Independent is less enthusiastic, saying, "Throughout, one is uncomfortably aware that Tartt's talents are not quite up to her intended effects."

The Awl opens with this: "Oh. Oh. WHAT could be more delightful? You’ve read it, of course. It’s… oh, I can’t even describe it. It’s a delight. A melodramatic, delightful delight." Kirkus Reviews opens by saying, "The Brat Pack meets The Bacchae in this precious, way-too-long, and utterly unsuspenseful town-and-gown murder tale." The New Canon concludes, "...new millennium readers will do well to acquaint themselves with this large talent with the small oeuvre, who would deserve a place in the contemporary canon if only on the basis of this gripping novel."