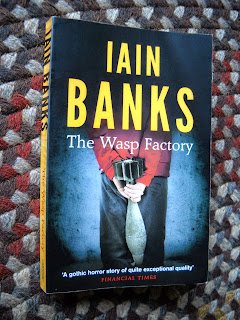 The Wasp Factory (be warned: that link is to a spoiler-filled Wkipedia entry) is Iain Banks' 1984 debut novel. I had been looking for this book for years but had never seen it on a bookstore shelf until I found it in the used section of my local bookseller. I wanted to read it because it was the first novel by the author of the much-beloved Culture science fiction series. Banks wrote science fiction using the name Iain M. Banks and used the name Iain Banks for his more mainstream works. This isn't science fiction. It is a bizarre tale of a very disturbed family. I'm glad I finally got hold of it.

"Two years after I killed Blyth I murdered my young brother Paul, for quite different reasons than I'd disposed of Blyth, and then a year after that I did for my young cousin Esmerelda more or less on a whim. That's my score to date. Three. I haven't killed anybody for years, and don't intend to ever again. It was just a stage I was going through."

Enter -if you can bear it- the extraordinary world of Frank, just sixteen, and unconventional, to say the least.

I was also trying to make the point that childhood innocence isn't -and wasn't- as most people seem to imagine it; children probably harbour quite as many violent thoughts as adults, they just don't usually possess a sophisticated moral framework within which to place them.

Not, come to think of it, that all adults do, either.

I got a big kick out of this quote, though it's not at all representative of the rest of the book:


I also liked this:

It has always seemed to me that people vote in a new government not because they actually agree with their politics but just because they want a change. Somehow they think that things will be better under the new lot. Well, people are stupid, but it all seems to have more to do with mood, caprice and atmosphere than carefully thought-out arguments.

Horror Novel Reviews concludes, "Frank is not a scion from which lessons can be learned and that leaves only the madness. Enjoy the journey." Kirkus Reviews says, "In sum: a nastily striking, somewhat uneven debut--at its dreadful best when not straining for symbolic shockers or cosmic resonance."
Posted by Divers and Sundry at 4:00 AM