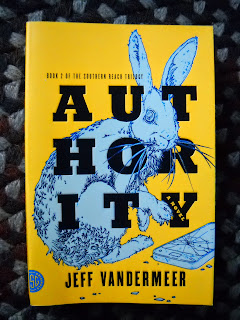 Authority is the 2nd book in Jeff VanderMeer's Southern Reach trilogy. I'm enjoying these books. They are strongly character-driven, and active plot developments aren't really what's happening. The characters and atmosphere are the primary draw, while the plot does move forward but slowly.

After thirty years, the only human engagement with Area X -a seemingly malevolent landscape surrounded by an invisible border and mysteriously wiped clean of all signs of civilization- has been a series of expeditions overseen by a government agency so secret it has almost been forgotten: the Southern Reach. Following the tumultuous twelfth expedition chronicled in Annihilation, the agency is in complete disarray.

John Rodriguez (aka "Control) is the Southern Reach's newly appointed head. Working with a distrustful but desperate team, a series of frustrating interrogations, a cache of hidden notes, and hours of profoundly troubling video footage, Control begins to penetrate the secrets of Area X. But with each discovery he must confront disturbing truths about himself and the agency he's pledged to serve.

In Authority the second volume of Jeff VanderMeer's Southern Reach trilogy, Area X's most disturbing questions are answered... but the answers are far from reassuring.

A circle looks at a square and sees a badly made circle.

Strange Horizons says it "is about the Southern Reach organization itself. The book is mostly concerned with the byzantine in-group political struggles and ultimate impotence of the organization's new leader, "Control." We get some more detail about Area X." Kirkus Reviews, like the Strange Horizons reviewer, liked the first book better. Tor's interview with the author quotes Vandermeer as saying these books are his "most overtly autobiographical novels in terms of the landscapes they inhabit—there are very few details of description that are things I haven’t observed or experienced personally in one form or another."
Posted by Divers and Sundry at 4:00 AM