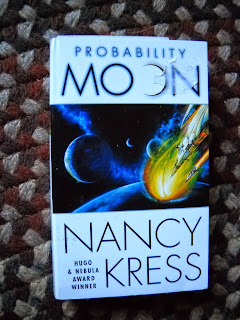 Probability Moon is a 2000 science fiction novel, first of the Probability series by Nancy Kress. I've had the third book in this trilogy for years but had never had the first two until I got them this past Christmas. This first one is a good read, alternating points of view between the military team on the orbiting ship and the scientists on the planet. Sometimes I find alternating povs awkward and choppy, but it's smoothly done and well-integrated here. Not every book can be an instant classic or stand up with the great works of all time, and there's plenty of room on my shelf for readable and re-readable books that are good. This will definitely stay on my shelf for a future re-read. This is an award-winning author.

I read plenty of science fiction, but I'll count this book towards the 2015 Read Harder challenge as "A sci-fi novel".


A Desperate Bid to Save Humanity
Humankind has expanded out into interstellar apace using star gates -technological remnants left behind by an ancient, long-vanished race. But the technology comes with a price. Among the stars, humanity encountered the Fallers, a strange alien race bent on nothing short of genocide. It's all-out war, and humanity is losing.

In this fragile situation, a new planet is discovered, inhabited by a pre-industrial race who experience "shared reality" -they're literally compelled to share the same worldview. A team of human scientists is dispatched -but what they don't know is that their mission of first contact is actually a covert military operation.

For one of the planet's moons is really a huge, mysterious artifact of the same origin as the star gates ... and it just may be the key to winning the war.

Probability Moon is a deftly written novel with believable characters who make mistakes and learn to live with the consequences. The prose is straightforward and never gets in the way of the story that Nancy Kress has to tell. It's a story that readers of science fiction should find to be engaging, thoughtful, and a pleasure to read.

The Hard SF reviewer "enjoyed the anthropological and mystery aspects of the book." Publishers Weekly says, "This is solid SF, but Kress has written better." Kirkus Reviews closes with this: "Twisty and compelling, brimful of ideas, with Kress’s usual life-sized characters: top-notch work from a major talent".
Posted by Divers and Sundry at 4:00 AM