Hakuho Does It Again! 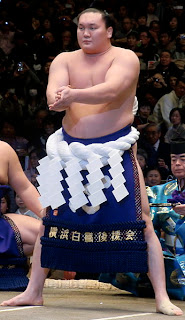 Hakuho has won the Sumo tournament and now has a 30 game winning streak! He's undefeated in the last 2 events.

Wikipedia has an overview, including this:


Making his debut in March 2001, he reached the top makuuchi division in May 2004. On 30 May, 2007 at the age of 22 he became the second native of Mongolia, and the fourth non-Japanese overall, to be promoted to the highest rank in sumo, yokozuna. He has won twenty-four yūshō or tournament championships to date. In 2009, he broke the record for the most wins in a calendar year, winning 86 out of 90 bouts, and repeated with the same record again in 2010 when he established the second longest winning streak in sumo history.

Hakuho's name appears on many of the record-holder lists.

Asia and Japan Watch opens its report with this:


Yokozuna Hakuho drove out Mongolian compatriot Harumafuji on the closing day of the Summer Grand Sumo Tournament on May 26 to capture his 25th Emperor's Cup and complete the 15-day competition with his second-consecutive perfect record.

Here's the final match, compliments of the Jasons In Japan Youtube channel:

The picture at the top of the post is from Wikipedia.
Posted by Divers and Sundry at 8:00 AM