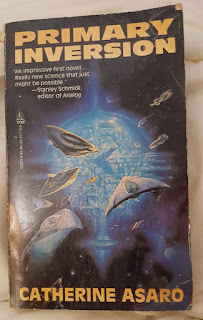 Primary Inversion is the debut novel of Catherine Asaro. She went on to fulfill the promise shown in this work, winning numerous awards since then.

The Skolian Empire rules a third of the civilized galaxy through its mastery of faster-than-light communication. But war with the rival empire of the Traders seems imminent, a war that can only lead to slavery for the Skolians or the destruction of both sides. Destructive skirmishes have already occurred. A desperate attempt must be made to avert total disaster.

Publishers Weekly concludes with this:

Though Asaro, a physicist, provides more than enough esoteric detail on faster-than-light inversion drives, cybernetic enhancements and computer networks, she manages to anchor her story with thoughtful, engaging characters and an intriguing vision of the future

Kirkus Reviews calls it "An imaginative debut".
Posted by Divers and Sundry at 2:00 AM