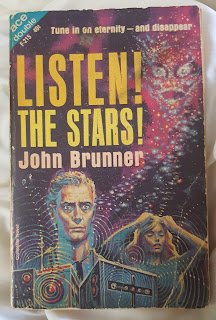 Listen! The Stars! is a 1963 science fiction novella by John Brunner. This was a quick easy read and brought back nostalgic feelings.

DANCE TO THE TUNES FROM ETERNITY

What was this thing called a stradropper whose use was the rage all around the world?

Ostensibly a simple device made from an amplifier, a magnet, a vacuum, a power source and an earpiece. Add it up and you got nonsense -in the form of strange sounds, unintelligible to the human race.

Stardropper -a menace to an insane world, or a warning from the stars?