Yesterday was the first anniversary of the death of Max Von Sydow, and I'm sharing Brink of Life in his memory. This 1958 Swedish film -directed by Ingmar Bergman and starring Eva Dahlbeck, Ingrid Thulin, Bibi Andersson, and Max Von Sydow- won several awards. 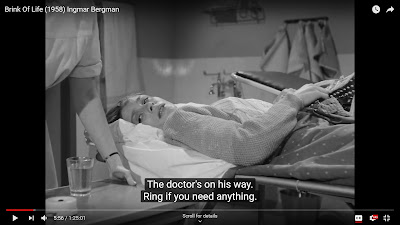 shows the nurse leaving a glass of water and a buzzer for the woman. The woman is in her 3rd month of pregnancy and was told to come to the hospital right away if she experienced bleeding. Her husband is in the waiting room.

When the film was released in the U.S. the NYT said,


a tribute to director Ingmar Bergman's versatility. Heretofore largely identified with elliptical and allegorical themes, Mr. Bergman, certainly one of the most vigorously creative film talents of our day, has confined himself here to an austerely straight story set in one ward of a modern hospital and involving several women and the psychological and physical traumas attendant on childbirth. Although it evolves as a basically somber, constricted, almost wholly distaff picture, "Brink of Life" is, nevertheless, a strikingly realistic, saccharine-free, clinical slice of life.

*******
Please share a post with a drink in it and join us at the T Stands for Tuesday blogger gathering hosted by Bleubeard and Elizabeth.
Posted by Divers and Sundry at 2:00 AM