The Far Country is a 1954 Western starring James Stewart and Walter Brennan. Anthony Mann directs. I watched it on Daily Motion, but it has been removed. Strike while the iron is hot, that's my motto. You can't count on these staying available.


By situating the drama of The Far Country upon the boundaries of the United States and the nineteenth century – ‘Seattle, 1896’ – Mann obviously has no interest in perpetuating the kind of golden pioneering myths so prevalent in early examples of the western genre. For the late 1890s was an interesting yet sad time in American history; a time when the glorious West and the notions of ‘wilderness’ and ‘heroes’ became severely tarnished.

Variety says, "Pic marks the fifth successful combination of James Stewart, as star, Aaron Rosenberg as producer, and Anthony Mann as director.". Rotten Tomatoes has a critics consensus score of 100%.

Here's Brennan's character complaining that the coffee is cold: 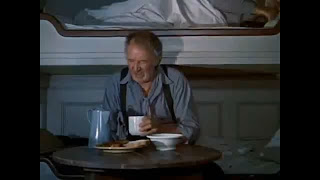 Please share your own drink reference at the T Stands for Tuesday blogger gathering hosted by Bleubeard and Elizabeth.