The Torture of Hope 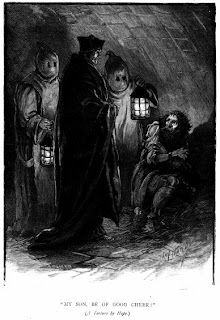 The Torture of Hope is an 1883 horror short story by Count Villiers de l'Isle-Adam, whose full name was Count Jean-Marie-Mathias-Philippe-Auguste de Villiers de L'Isle-Adam. It can be read online.

The Lovecraft wiki says, "Of his works, H.P.Lovecraft was wery found of the story A Torture by Hope." I think the wiki needs an editor or better spellers, but you can tell what it means to say. James Huneker, in his 1905 book Iconoclasts: A Book of Dramatists, says the author "is best known to Americans by the story in his Contes Cruels, entitled, The Torture by Hope, which recalls Poe at his best"

The picture at the top of the post is of one of the original illustrations. This and other illustrations are linked here.
Posted by Divers and Sundry at 11:30 AM