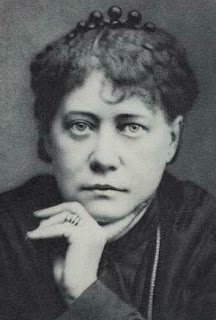 The Ensouled Violin is an 1892 horror short story by Helena Blavatsky. It can be read online. I don't find it particularly compelling and may well not read anything else by her.

Blavatsky is best known as co-founder of the Theosophical Society. from Blavatsky's Key to Theosophy:

THE MEANING OF THE NAME

ENQUIRER. Theosophy and its doctrines are often referred to as a new-fangled religion. Is it a religion?

THEOSOPHIST. It is not. Theosophy is Divine Knowledge or Science.

ENQUIRER. What is the real meaning of the term?

THEOSOPHIST. "Divine Wisdom," (Theosophia) or Wisdom of the gods, as (theogonia), genealogy of the gods. The word theos means a god in Greek, one of the divine beings, certainly not "God" in the sense attached in our day to the term. Therefore, it is not "Wisdom of God," as translated by some, but Divine Wisdom such as that possessed by the gods. The term is many thousand years old.

ENQUIRER. What is the origin of the name?

THEOSOPHIST. It comes to us from the Alexandrian philosophers, called lovers of truth, Philaletheians, from phil "loving," and aletheia "truth." The name Theosophy dates from the third century of our era, and began with Ammonius Saccas and his disciples (1), who started the Eclectic Theosophical system.

ENQUIRER. What was the object of this system?

THEOSOPHIST. First of all to inculcate certain great moral truths upon its disciples, and all those who were "lovers of the truth." Hence the motto adopted by the Theosophical Society: "There is no religion higher than truth." (2) The chief aim of the Founders of the Eclectic Theosophical School was one of the three objects of its modern successor, the Theosophical Society, namely, to reconcile all religions, sects and nations under a common system of ethics, based on eternal verities.

ENQUIRER. What have you to show that this is not an impossible dream; and that all the world's religions are based on the one and the same truth?

THEOSOPHIST. Their comparative study and analysis. The "Wisdom-religion" was one in antiquity; and the sameness of primitive religious philosophy is proven to us by the identical doctrines taught to the Initiates during the MYSTERIES, an institution once universally diffused. "All the old worships indicate the existence of a single Theosophy anterior to them. The key that is to open one must open all; otherwise it cannot be the right key." (Eclect. Philo.)