The Woman Who Walked in Sunshine 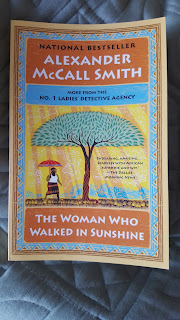 The Woman Who Walked in Sunshine is the 16th in the No. 1 Ladies' Detective Agency book series by Alexander McCall Smith. This was published in 2015, I'm reading this series in publication order, and I enjoy them. There's not much mystery to them, but the setting, characters and writing keep me coming back for more. This is another delightful addition to the series.


Precious Ramotswe, the esteemed proprietor of the No. 1 Ladies' Detective Agency, now faces her greatest challenge yet: a vacation!

Business is slow at the agency -so slow in fact that, for the first time in her distinguished career, Mma Ramotswe has reluctantly agreed to take a holiday. The week of uninterrupted peace is cut short, however, when she meets Samuel, a wayward young boy with a troubled past. Moreover,
Mma Ramotswe can't help but wonder how the agency is faring in her absence. Her worries grow when she discovers that Mma Makutsi is handling a rather delicate case.

Ultimately, the situation will require Mma Ramotswe to draw upon her kindness, generosity, and good sense, and will serve to remind them all that ordinary human failings should be treated with a large helping of charity and compassion.

quotes that struck me:


They both fell into silence as they contemplated the sheer injustice of Violet Sephotho's apparent happiness.
Mma Makutsi opened her mouth to speak, but thought better of it and closed it again. She had been about to say, "But God will surely punish her,
Mma," then had decided that this was not the sort of thing that people said any more, even if it was what they were thinking. The trouble was,
she thought, that God had so many people to punish these days that he just might not find the time to get round to dealing with Violet Sephotho.
It was a disappointing thought -a lost opportunity, in a sense: she would very willingly habe volunteered her services to assist in divine punishmet, perhaps through something she would call Mma Makutsi's League of Justice that would, strictly but fairly, punish people like Violet.

Mma Ramotswe's own thoughts were far from retribution, divine or otherwise.

In her work, Mma Ramotswe had learned this and had discovered, too, that even the most inconsequential of secrets could weigh heavily on a person's soul. An act of selfishness, some small unkindness, could seem every bit as grave as a dreadful crime; an entirely human failing,
a weakness in the face of temptation, could be as burdensome as a major character flaw: the size of the secret said nothing about its weight on the soul.

She gazed at her husband. Being loved and admired by a man like that -and she knew that this man, this mechanic, this fixer of machines with their broken hearts, did indeed love and admire her- was like walking in the sunshine; it gave the same feeling of warmth and pleasure to bask in the love of one who has promised it, publicly at a wedding ceremony, and who is constant in his promise that such love will be given for the rest of his days. What more could any woman ask? None of us, she thought, not one single one of us, could ask for anything more than that.

We forget, she thought. We think that we were always the way we are now, but we were not.

*******
Publishers Weekly closes with this: "As usual, Smith’s blend of gentle humor and insights into human nature is irresistible."

I've read these others from this series:

The No. 1 Ladies' Detective Agency
Tears of the Giraffe
Morality for Beautiful Girls
The Kalahari Typing School for Men
The Full Cupboard of Life
In the Company of Cheerful Ladies
Blue Shoes and Happiness
The Good Husband from Zebra Drive
Tea Time for the Traditionally Built
The Miracle at Speedy Motors
The Double Comfort Safari Club
The Saturday Big Tent Wedding Party
The Limpopo Academy of Private Detection
The Minor Adjustment Beauty Salon
The Handsome Man's De Luxe Cafe
Posted by Divers and Sundry at 4:00 AM