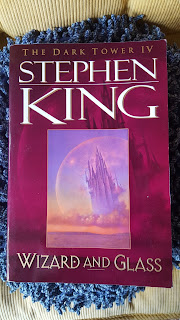 Wizard and Glass is the 4th book in Stephen King's Dark Tower series. This one focuses on The Gunslinger's youth, told as a fireside story to his current companions. This book is 668 pages long. It's an interesting story, but I'm glad to be done with it. There are 7 books in this series, and God help me Book 5 is longer than book 4.


At last, Stephen King returns to the Dark Tower with the eagerly anticipated fourth volume in his bestselling series. Roland, The Last Gunslinger, and his band of followers have narrowly escaped one world, and slipped into the nest. It is here that Roland tells them a long-ago tale of love and adventure involving a beautiful and quixotic woman named Susan Delgado. With shocking plot twists and a driving narrative force, Wizard and Glass is the book readers have been waiting for.


And the Tower is closer....
THE DARK TOWER
Set in a world of extraordinary circumstances, filled with stunning visual imagery and unforgettable characters, The Dark Tower series is unlike anything you've ever read. Here is Stephen King's most visionary piece of storytelling, a magical mix of fantasy and horror that may well be his crowning achievement.


Join the quest for the elusive Dark Tower.

Rolling Stone took a poll, and this book came in on the list of top 10 Stephen King books. SF Site says it is "the strongest book of the first four in the series, the most controlled, the most reverberant with what the so-called literary writers like to call "craft." It also marks the final stage in the transformation of King's narrative style to something fully mature and realized". SFF Book Reviews rates it 9 out of 10.