The Dark Tower 3: The Waste Lands 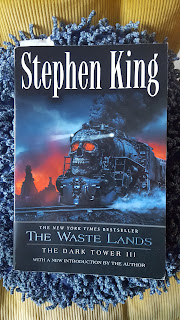 The Waste Lands is the 3rd book in Stephen King's Dark Tower series. Much better than the 2nd book, this one gives me hope that I'll finish the series before the sequel movie comes out in November.


In this fantastical third book in the Dark Tower series, Stephen King once again takes readers on a journey of incomparable imagination. Roland, the last gunslinger, is moving ever closer to the Dark Tower, which haunts his dreams and nightmares.
As he and his friends cross a desert of damnation in their macabre new world, revelations begin to unfold about who -and what- is driving him forward. A blend of riveting action and powerful drama, The Waste Lands leaves readers breathlessly awaiting the next chapter.


"What we don't need is a man who can't let go of the useless baggage of his memories."

"... it occurred to him that there were a lot of stories for kids with stuff like this in them, stuff that threw acid all over your emotions. Hansel and Gretel being turned out into the forest, Bambi's mother getting scragged by a hunter, the death of Old Yeller.
It was easy to hurt little kids, easy to make them cry, and this seemed to bring out a strangely sadistic streak in many story-tellers..."

The sky was huge -he could not remember seeing so much uninterrupted space, so much pure emptiness. It made him feel very small,
and he supposed there was nothing at all wrong with that. In the scheme of things, he was very small.