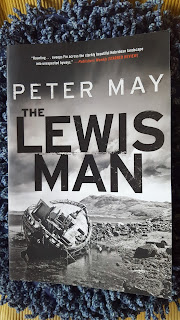 The Lewis Man is the second book in Lewis mystery series by Peter May. I had another book by this author recommended to me, but my local bookseller didn't have it. They had others, though, so I bought this trilogy. I'm a fan now. I look forward to reading the next in this series and exploring more of this author's work.

The mummified body of a man is discovered in a peat bog on the Isle of Lewis. Punctured by several stab wounds, the corpse is initially believed to be more than two thousand years old -until the police spot the Elvis tattoo on the right arm.
Having recently left behind his previous life in Edinburgh, including his career as a detective inspector, native islander Fin Macleod finds himself once again chasing the past across the beautiful, rugged Outer Hebrides in a hunt for long-buried secrets.

The Guardian opens by saying, "It's a relief to find that the second novel in May's Isle of Lewis trilogy is as good as its superb predecessor". The Scotsman has a positive review. Eurocrime says, "Very highly recommended."

Kirkus Reviews closes with this: "Despite some well-judged surprises, the mystery isn’t all that mysterious. But you’ll keep turning the pages anyway—not to learn whodunit, but to find out what’s going to happen to the present-day characters so deeply, fatally rooted in the past." Publishers Weekly describes it this way: "The fast-moving investigation sweeps Fin across the starkly beautiful Hebridean landscape into unexpected byways".
Posted by Divers and Sundry at 4:00 AM