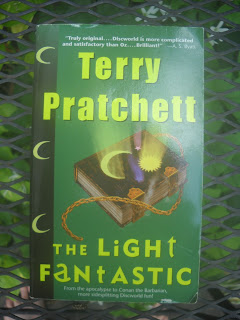 The Light Fantastic is the 2nd in Terry Pratchett's Discworld series. It is a direct sequel to the 1st book and is the only direct sequel in the long-running series. I'm not reading these in order, instead reading them as I come cross them in the book store. This one is the first of Pratchett's books to disappoint me. It has Rincewind and The Luggage, which ought to guarantee my enjoyment. Oddly, it was so forgettable that I discovered as I was writing this post that I'd already read this back in 2008. I seem to have enjoyed it back then, but I still have no memory at all of having read it before. *sigh* My memory isn't that bad, honest. Maybe the series is wearing thin for me.

.... only one individual can save the world from a disastrous collision. Unfortunately, the hero happens to be the singularly inept wizard Rincewind, who was last seen falling off the edge of the world....

... such questions take time and could be more trouble that they are worth. For example, it is said that someone at a party once asked the famous philosopher Ly Tin Weedle "Why are you here?" and the reply took three years.


Rincewind had been generally reckoned by his tutors to be a natural wizard in the same way that fish are natural mountaineers.


"I always say home is where you hang your hat."

"Um, no," said Twoflower, always anxious to enlighten. "Where you hang your hat is a hatstand..."


"... The important thing about having lots of things to remember is that you've got to go somewhere afterward where you can remember them, you see? You've got to stop. You haven't really been anywhere until you've got back home. I think that's what I mean."

Rincewind ran the sentence across his mind again. It didn't seem any better second time around.

I've read the following books from the series: