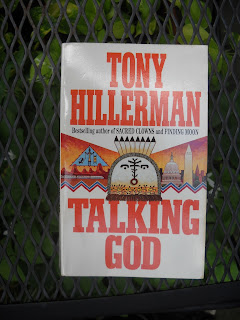 Talking God (1989) is 9th in Tony Hillerman's Joe Leaphorn/Jim Chee Navajo Tribal Plice series. I enjoyed the book as a mystery, but I prefer the ones in this series that take place on tribal lands. This one has some action early on that takes place in Navajo territory, but the bulk of the book centers in Washington, D.C. Not that the Smithsonian isn't interesting, not at all, it's just that I like the Western setting better for these characters. There's a healthy-sized stack at the foot of my bed, and I'm working my way happily through all of the Leaphorn/Chee books.


A grave robber and a corpse reunite Navajo Police Lt. Joe Leaphorn and Officer Jim Chee. As Leaphorn seeks the identity of a murder victim, Chee is arresting Smithsonian conservator Henry Highhawk for ransacking the sacred bones of his ancestors. As the layers of each case are peeled away, it becomes shockingly clear that they are connected, that there are mysterious others pursuing Highhawk, and that Leaphorn and Chee have entered into the dangerous arena of superstition, ancient ceremony, and living gods.