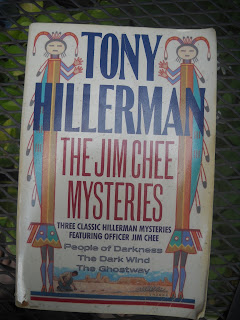 The Jim Chee Mysteries is a collection of 3 novels featuring Officer Jim Chee written by Tony Hillerman. Included are People of Darkness (1980), The Dark Wind (1982), and The Ghostway (1984). I enjoy Hillerman's writing and like reading about Jim Chee.

People of Darkness is Jim Chee's first appearance. You can read a thorough plot summary at Wikipedia.

The Dark Wind was adapted as a 1991 film by the same name starring Lou Diamond Phillips as Chee. That film might be a good intro to the world of Jim Chee if you don't want to commit to a book, but you'll be hunting down the books once you've watched it. Here's the movie trailer:

The trailer is dated, certainly, but the film itself has held up well.

Kirkus Reviews calls The Ghostway "one of Hillerman's best Navajo mysteries--keeping suspense, Indian lore, and character in stately yet compelling balance." Together, these 3 books are a great way to dive into Hillerman's Navajo creation. I think the entire series is worth looking for. I've read quite a few so far, including Dance Hall of the Dead (1973), Skinwalkers (1986), and The Sinister Pig (2003).

Tony Hillerman died of pulmonary failure in 2008 at the age of 83, so it's nice that the books he wrote are re-readable. His daughter is continuing the series with books based on Chee's wife (Chee is not married in the 3 books in this volume), but I'm going to skip those.
Posted by Divers and Sundry at 4:00 AM