The Twelve Kingdoms: Sea of Shadow 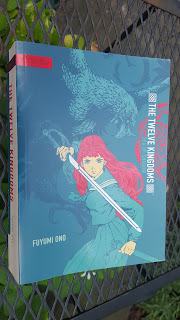 I'm using this to meet the 2015 Read Harder Challenge under the Indie Press category. I had a lot of trouble discerning what was and was not a small/indie press but saw TokyoPop referred to as such on some web sites. That's good enough for me. I came across this used, and it's currently out of print. It's available for as little as $2.50 on Amazon.com, and I'd have definitely sought this series out when my kids were of an appropriate age.

Sea of Shadow is the 1st volume of The Twelve Kingdoms, a series written by Fuyumi Ono and illustrated by Akihiro Yamada. I find in distinctly young-adulty, but I enjoyed it even so. I'd definitely recommend it for young people who like adventure stories that feature magic and other worlds, especially for females seeking a female protagonist. It's a quick, easy read with striking black and white full-page illustrations. Here's a sample picture: 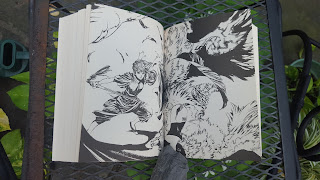 More than just a fantasy story filled with horrific monsters, half-beasts, and magicians, The Twelve Kingdoms centers around a world reminiscent of Chinese mythology and rife with political and civil upheaval. Sea of Shadow, the first volume of this ongoing seven-volume epic, takes you on a wild ride that leaves you questioning the bounds of reality and fantasy.

Wikipedia has this plot synopsis:

Yoko Nakajima's life had been fairly ordinary until Keiki, a young man with golden hair, tells her that she is his master, and must return to their kingdom. With the help of a magic sword and a magic stone she fights against the demons on her trail. Yoko begins her quest for both survival and self-discovery in her new land.