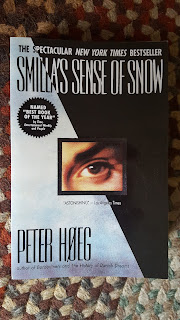 Smilla's Sense of Snow (or Miss Smilla's Feeling for Snow) is a 1992 Danish mystery novel. I have mixed feelings about this one. I liked the main character and the ones most closely related to her, but the other characters all ran together for me. I also found it dragged, and for me the part of the plot that took place on the ship seemed interminable. I was tempted to skip entire pages when I noticed that she was still on that ship and that effectively the plot hadn't advanced at all. I didn't. But I was sorely tempted. When it was finally over, I didn't even care any more.

It was adapted for film in 1997. I hadn't even heard of the movie until I started reading about the book.


She thinks more highly of snow and ice than she does of love. She lives in a world of numbers, science and memories -a dark, exotic stranger in a strange land. And now Smilla Jaspersen is convinced she has uncovered a shattering crime....

It happened in the Copenhagen snow. A six-year-old boy, a Greenlander like Smilla, fell to his death from the top of his apartment building. While the boy's body is still warm, the police pronounce his death an accident. But Smilla knows her young neighbor didn't fall from the roof on his own. Soon she is following a path of clues as clear to her as footsteps in the snow. For her dead neighbor, and for herself, she must embark on a harrowing journey of lies, revelation and violence that will take her back to the world of ice and snow from which she comes, where an explosive secret waits beneath the ice....


I feel the same way about solitude as some people feel about the blessing of the church. It's the light of grace for me. I never close my door behind me without the awareness that I'm carrying out an act of mercy towards myself.

There's a widespread notion that children are open, that the truth about their nner selves just seeps out of them. That's all wrong. No one is more covert than a child, and no one has a greater need to be that way. It's a response to a world that's always using a can opener to open them up to see what's inside, wondering whether it ought to be replaced with a more useful sort of preserves.

The knives in my apartment are only sharp enough to open envelopes with. Cutting a slice of course bread is on the borderline of their ability. I don't need anything sharper. Otherwise, on bad days, it might easily occur to me that I could always go stand in the bathroom in front of the mirror and slit my throat. On such occasions it's nice to have the added security of needing to go downstairs and boror a decent knife from a neighbor.

I'm not crying about anything or anyone specific. The life I live I created for myself, and I wouldn't want it any different. I cry because in the universe there is something as beautiful as Kremer playing the Brahms violin concerto.

People hold their lives together by means of the clock. If you make a slight change, something interesting nearly always happens.

Nothing in life should simply be a passage from one place to another. Each walk should be taken as if it is the only thing you have left.

What complicates life is having to make choices. The person who is pushed forward lives simply.

Nothing was more reassuring to me than the knowledge that I would die. In these moments of clarity -and you see yourself clearly only when you see yourself as a stranger- all despair, all gaiety, all depression vanish and are replaced by calm. For me death was not something scary or a state of being or an event that would happen to me. It was a focusing on the now, an aid, an ally in the effort to be mentally present.

*******
The NYT says, "If "Smilla's Sense of Snow" is an indication of what Peter Hoeg has in store for us, he may yet be offered a provisional chair in the corner of literary heaven reserved for great suspense novelists". Kirkus Reviews has a positive review.


Smilla’s Sense of Snow is an incredibly entertaining novel, and I’m sure anyone who is a fan of mysteries would enjoy it. But for me, the best part was learning about the history and culture of Greenland. Hoeg deftly explores the many problems of the colonization of the island nation, weaving social critique and historical context into his text in a masterful way.

Mystery Scene says it "dramatically explores alienation, the loss of identity, cultural diversity, exploitation of the environment, science and the intricacies of love." Publishers Weekly calls it "A dark, taut, compelling story, it's a real find."
Posted by Divers and Sundry at 4:00 AM