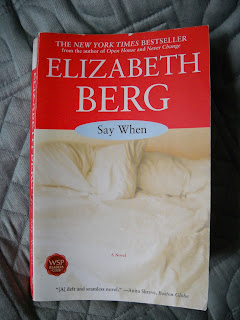 Say When is a 2003 novel by Elizabeth Berg. I read and enjoyed Open House (2000) and picked this one up on the strength of my experience with that other book. This, like the other one, is a sad book but one that ends on a note of hope -hope for the future, hope for committed relationships, hope for what family can be in our lives. It's sentimental, but that's not always a bad thing.


When is a marriage worth saving and when is it best to let go? When do half-truths turn into full-blown lies? When does betrayal end and passion begin?

Say When is a compelling, complex novel that takes readers into the heart of a modern marriage where companionship and intimacy, and denial and pain, so often collide. "Of course he knew she was seeing someone," begins the story of Frank Griffin, a man who's willing to overlook his wife's infidelity -he would let her have this, this thrilling little romance- for the sake of keeping his family intact. But when the forty-year-old Ellen requests a divorce on the basis that she has finally found true, romantic love, Griffin must decide whether to fight or flee ... or search elsewhere for the kind of life he always dreamed of.

With Elizabeth Berg's trademark blend of rare insight, raw emotion, and hard-won wisdom, Say When is a work of startling revelation that no reader will soon forget.


Of course he knew she was seeing someone. He knew who it was, too. Six months ago, saying she needed a new direction in her life, saying she was tired of feeling helpless around anything mechanical, that she had no idea how to even change a tire, Ellen had taken a course in basic auto mechanics -"Know Your Car," it was called. She'd come back the first night saying it was amazing, she'd had the admittedly elitist idea that mechanics were illiterate, but this one was so well-spoken, and he'd walked into the classroom carrying a pile of books he'd just bought -hardback! Mostly new fiction, she'd said. But also Balzac, because he'd never read him.


After a while, pain simply stopped. It was as though your mind was able to create a firewall beyond which it would not let you venture. You had to have a break from your anguish, or you'd go crazy. It was the psychological equivalent to fainting when physical pain became overbearing.

Publishers Weekly concludes, "These days, separation and divorce are commonplace, but a book that treats those subjects with Berg's tenderness and understanding is not." Kirkus Reviews calls it "Contrived and sentimental".
Posted by Divers and Sundry at 4:00 AM